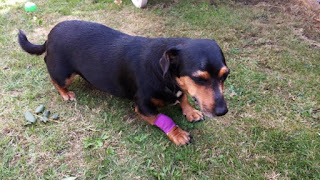 I slept for a bit last night then lay awake listening out for my dog. At 4am I felt I couldn’t leave him anymore and came down to find him asleep. He looked up when I came to his basket. With a little encouragement he got up and went to the garden, then ate Rolo’s biscuits.
We both went back to bed, and when I came down at 6.30am he wagged his tail when he saw me. I took that to be a good sign, then he refused his breakfast. He did walk round the garden and have a wee, but he was walking very awkwardly. I thought it was the catheter still in his front leg which was upsetting him; that could be taken out.

I set the washing machine to chew the last of the laundry whilst I watched the last episode of “Top Boy”, then once the laundry was hung out I took my dog to the vets. For the third time we were first in the queue outside waiting for them to open.
The nice vet lady said she was pleased with his progress, took the catheter from his leg and gave him some more medications. She then brought him back to me. Today wasn’t a day in dog hospital.
Vets are rather amazing. When I’m not well I can tell the doctor exactly what’s wrong, how long the symptoms have been going on, where it hurts, and if the medicine is working. Animals however just seem to be a bit off-colour and the vet has to figure it out with nowhere near so many clues. From what we can work out my dog has eaten something which has given him very dodgy guts. The pain of a bloated gut has made him walk awkwardly which has set off the spondylosis he developed when he slipped a disc a couple of years ago. The vet says he is on the mend, but it will be a slow process.

"Daddy’s Little Angel TM" met me at the vet’s; we took my dog home and settled him. We then drove out to Ramsgate. "Daddy’s Little Angel TM" had arranged to buy a wardrobe and I was to collect it. As the A28 was closed we had to go via Challock. It was as well we went that way. I had an email this morning. Apparently there was a geo-coin in one of the caches I’d archived on Friday. Could I retrieve it? I’d actually been to all of the caches that I’d archived when I went round with Rolo. This one had been buried when a tree had collapsed on it. I hadn’t been able to get to it on Friday; but since I’d been asked I thought I’d have another try. Unfortunately, I couldn’t get at the cache- there was several tons of tree on it.

We made our way to Ramsgate. I was glad to see the chap selling the wardrobe had taken the thing to pieces. That made getting it into the car a lot easier. And with the car loaded with the ingredients of a wardrobe we came home. Via the wonderfully-named Hengist way and McDonalds.

Normally I would have hung around to interfere with the building of the wardrobe, but I wanted to get home to my dog. I’d assumed he’d still be in his basket; as I walked in to the house he ran from his basket to see me. I was so happy, but after a dozen paces he stopped awkwardly and cried. He *really* needs to take things easy. But the fact that he’d got up and come to see me was a major advance on how he’d been over the last few days.
I showed him his lead and he clearly got excited, so I put his lad on him and took him and Rolo for a walk. We walked at a snail’s pace, and walked the shortest “round the block” that is possible locally. Even so a walk of a few hundred yards took fifteen minutes, and he was clearly flagging toward the end of the walk.

I lifted my dog onto the sofa and sat with him for the afternoon and evening. There was all sorts of drivel on the telly. “Fantastic Journey” was on; I’d not seen that for years. “The Seventh Voyage of Sinbad” was quite entertaining; the special effects were dire but the film makers knew that so the film had a plot to make up for it. “Are You Being Served – The Movie” was rather sad. But the period drama “Doctor Foster” was quite good if you like that sort of thing (which I do)

As I watched the telly my little dog snuggled next to me. And his condition changed from one minute to the next. Sometimes he would be sleeping contentedly and relaxed. Other times he would be rigid and burping. And other times he would be quivering uncontrollably. Most of the time his tummy was gurgling.
He's just been out for a tiddle and had his medications forced down his neck, and is currently laying in his basket absolutely spaced out on tramadol. He’s not eaten anything since 4.30am.
The vet says he is on the mend. I must trust her judgement…