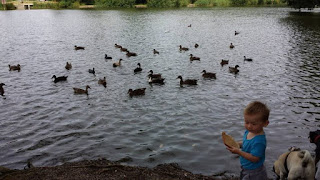 As I worked last night I listened to the radio. There was a rather fascinating article about the psychology of stalkers. There was a thought-provoking feature on how separated parents cope. Dick Barton and Campion did their things. And the pundits were speculating about what seems to be a civil war in UKIP as the party apparently tries to becomes something more than "The Nigel Farage Show"
And all the time I was very conscious that had I been allowed holiday I could have been hundreds of miles away camping at the Welsh geo-Mega. (Even if the weather there hasn't been what it might have been this week).

I came home, collected "Furry Face TM" and we went out to meet "Daddy’s Little Angel TM" and "Stormageddon - Bringer of Destruction TM". We made our way to the shops at Court Wurtin (what a wonderful name for a row of shops!) where I went in to buy some bread. There was a rather “council” chap at the head of the queue for the till. He had bought some scratch cards and insisted on scratching them there and then. It was only when some little old lady started coughing that he looked around and realised he wasn’t the only person in the shop.

Suitably armed with bread (and chocolate frogs) we walked around to Singleton Lake. As we walked "Daddy’s Little Angel TM" told me of the ructions at yesterday’s mother and toddler group. One of the baby groups meets in a church. Not the church hall but the actual church. Apparently there is a gaggle of church-goers assigned to stop the toddlers destroying the church, and the mothers don’t like it when the old biddies tell their little darlings not to trash church property.
The obvious answer would be to stage the mother and toddler group in the church hall…
Once at the lake we found ourselves mobbed by ducks. I fed bread to the ducks. "Stormageddon - Bringer of Destruction TM" fed bread to the dogs before randomly running off and causing a passing cyclist to crash into the undergrowth.
Oh how I laughed.

Pausing only briefly for Fudge to swim in the river whilst we exchanged pleasantries with OrangeHead we were soon home again. I took myself off to bed and slept for five hours.
Over a bit of pizza I watched one of the episodes of “Game of Thrones” that the SkyPlus box had recorded for me last night. Usually on an afternoon before the night shift I’d watch “Upstairs Downstairs” on the Drama channel. But they usually have adverts about suffering animals and I didn’t want to see that today.

I’m off to another night shift now…