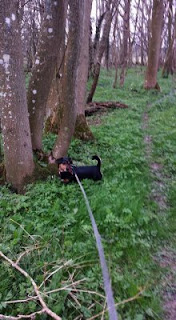 As I worked last night I had the radio on. One article struck me as being a sign of the times.... Apparently the Butlins holiday camp has caused upset. As part of the entertainment for the masses was a wrestling match. I've seen this sort of thing before; it is all good fun. But was this match? It featured some hero-wrestler "Tony Spitfire" (clad in Union Jack attire). When Tony entered the ring the crowd were encouraged to chant "England! England! ". His opponent was some chap called Hakim who was waving some flag which was (apparently) instantly recognisable as being Islamic, and the crowd was told to boo and jeer at him.
Whilst this shouldn't have happened, bearing in mind the international climate is anyone surprised?

There was also something which made me sit up and take notice. I have always said that history is written by those who can be bothered to write it down. (i.e.me!) But it turns out that historians are now re-thinking Churchill's role as war-time leader. For all that he did a wonderful job, history overlooks the team who helped him. And why is that? because (apparently) historians studying the second world war seem to use books which were written by Churchill as a major reference.
Churchill himself once said "History will be kind to me for I intend to write it"

I came home to find "er indoors TM" was rather concerned about "Furry Face TM". He hadn't eaten his tea last night and he'd spent the night on the sofa rather than going upstairs. I thought he seemed rather subdued yesterday, but when he saw me this morning he went ballistic.
I popped his lead on him and we drove out to Bethersden for a little walk.
About six months ago I hid thirty eight geocaches in a circular walk around Bethersden. Over the winter the floods had washed one away. It would be the one which was furthest from a road. We stomped across the mud, found where it used to be. Sure enough it had gone so I replaced it. As we walked I took a photo of the woods and posted it on Facebook with the caption "Geocaches don't maintain themselves".
And then I pondered...
When I go for a geo-walk I do my homework. If any seem to be missing before we go out I message the chap who owns the missing cache and ask if they'd like me to replace it. If when I am out I can't find one and I'm sure it has gone I'll replace it (and message the owner). If the paper log is wet or damp I'll replace it. Everyone is *always* grateful for my efforts; from the perspective of the people who are supposed to do geo-maintenance the caches I find *do* maintain themselves.
It's just the ones that I hide that don't.

We got back to the car just as the heavy rain started. It was as well I'd put a towel on the passenger seat; being low-down my dog does collect the mud. But bathing him didn't take long, and within minutes of his bath he was snoring.
I did myself a little toast, then went to bed at 11am with the intention to be up by the early afternoon. I slept a little longer that I had planned.
Having woken feeling something like death warmed up I set the washing machine loose on my smalls then spent an hour or so writing another blog.

"er indoors TM" came home and boiled up a rather good bit of scoff which we devoured whilst catching up with stuff the SkyPlus box had recorded for us. That SkyPlus box is good to us...