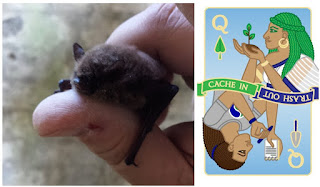 I would have expected to have slept well last night having downed a gallon of ale. However my dog spent much of the night pushing and kicking me whilst making himself comfortable. I *know* I should have taken him back to his basket, but he's such a little sweetie.... (Did I ever mention I never wanted a dog?)

Over brekkie I swallowed coffee like medicine. There's no denying I was feeling a tad under the weather. Whilst I will strenuosly maintain that I am not too old to go geocaching up trees, in rivers or underground, I can't help but wonder if going out for a serious pub crawl is (more and more) a younger man's game. Regular readers of this drivel may recall that Saturday always used to be pub crawl afternoon. How did I ever manage it?
I tried to have my usual mooch round the Internet, but struggled somewhat. A little while ago our Internet connection was flaky to the point of being unusable. We upgraded to fibre-optic and it has been far better. But this morning it was having troubles. I wonder what that was all about.

We collected Suzy and her entourage and set off on our usual Sunday geo-mission. But today was a geo-mission with a differennce. Today was the monthly geo-meet, and today we'd been asked if we wouldn't mind helping out with a party of volunteers working on the Drop Redoubt at Dover's Western Heights. Thhis was CITO weekend in whiich geocachers around the world were asked to get involved in tidying up where we could.
We met up with everyone and after a quick pep-talk we werer asked to divide oursellves into two gangs. One gang would be doing clearances of brambles; I went with a smaller group who would be doing heavy lifting inside the redoubt itself.

I actually said at the time that it would be so easy to write "half a dozen of us carried fifty scaffold boards up sixty six steps, then down eighty steps". And I was right. *Very* easy to write it; *incredibly* hard work to do. But despite the wheezing, gasping for air and chest pains it was fun. We did have a laugh. And with scaffold boards shifted we fetched and carried some more.

We were then sent for a spot of lunch. But seeing how the other gang were still hacking the brambles, Karl and I found a vantage point from which we had a wonderful view, and sat and watched the world go by over a bottle of ale. We could see the harbour spread out below us, and with it being such a bright day we could clearly see the coast of France in the distance.
We joined everyone else for a spot of lunch (and another bottle), then being gluttons for punishment we left those doing serious gardening to their hacking and we went back to the redoubt. For the afternoon we were asked to move a load of bricks from one place to another. We had quite the chain-gang going. Jason bashed the bricks together to shift the loosee dirt then passed them to Karl who loaded them into buckets. Karl then lowered the buckets of bricks to Gordon. Gordon then lowered the buckets (on a rope) to me. I then unloaded the bricks and passed them to Aleta who then stacked them where they were to be stacked.
After half an hour of this I had a little surprise. There was what looked like a leaf on one of the bricks. A furry leaf. A moving furry leaf.

On closer inspection I saw we had a little bat in our bucket. He'd survived the bricks being knocked together, passed around, loaded into buckets and lowered about on ropes. We immediately stopped work and had a little conflab. Realising I was probably breaking the law I picked the bat up anyway. He seemed quite content to be handled; I carried him to the brick pile from where he must have come. We made a little shelter for him (a bat-cave!) and I tried to put him in there. It took some doing; he didn't want to let go of my thumb, and because he was so small I was very conscious that I might hurt him. I took a few photos of him before he finally let me go.

I had another bottle of ale to calm my nerves after this ordeal, then we went to join the other working party. They'd done amazing work. What was originally a bramble-ridden thicket was now completely cleared. I chipped in for a few minutes scraping soil away to expose a set of stairs which were two hundred years old
By now most people had gone home; where we'd started with over fifty people we were now down to the last dozen. And realising that we didn't want to get locked in we said our goodbyes and came home.

Once home I put some washing in (laundry doesn't wash itself you know) and I then did a little bat-research. I did know that it was illegal to handle a bat. However it says on the Internet "It is illegal to handle a bat unless to rescue it from danger". That little thing was certainly in danger where we were hoiking the bricks about. I don't think I'll get in too much trouble from carrying him to safety.

With "er indoors TM" off bowling I settled in front of the telly. I turned up the volume so's I could hear the telly over the sound of my dog's snoring aand watched a film. "Ender's Game" was something I've been meaning to watch for some time. It was something of a disappointment....