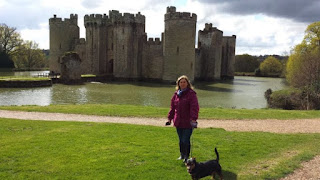 Over brekkie I saw that there is now a paperback version of the book in which my stories were published. You can buy it on Amazon by clicking here. Ok it's not cheap but if any of my loyal readers get a copy I'll sign it for you. And (at a stretch) I can probably get one of the other authors to scribble on it too....
I then read something which made me a little sad. There are plans afoot for a new Star Trek series to be released next year. In the meantime those who own the copyright to all things trekkie are clamping down on the unlicenced use of their stuff. Whilst it is their right to do so, I wonder if they are pissing off the very people to whom they are trying to cater. Mind you the fan-run Star Trek themed pub in London was closed down years ago for breach of copyright. Fan-run conventions done for fun don't happen any more. It has *always* been about the money. Shame, really...

My dog eventually woke, and he came and sat with me on the sofa generally being soppy. As I did I reflected that a cat would only be soppy for a few minutes before either biting or clawing me.

With brekkie scoffed we popped the lead on to "Furry Face TM" and went for a little walk. Both "er indoors TM" and I needed to find tupperware what with today being a geo-calendar day for both of us. We drove down to Bodiam, parked in the car park (three quid please!) and went for a little stroll.
First of all we went down to the steam train. That would have been rather nice had I not clouted my head on a sign and had we not found a dying duck. The poor duck had obviously been hit by a car. My initial reaction was to put it out of its misery, but "er indoors TM" thought we should give it a chance so I carried it to a nearby field where it sat looking rather the worse for wear. I suspect a fox has now had it.
We then walked back to the castle's grounds where I told the nice lady from the National Trust that I was *not* going to pay £9.15 to walk along a public footpath. She tried to claim that where we were standing was not a public footpath. I conceded that specific point, but pointed out that one hundred yards along from where we were arguing *was* a public footpath and the only reason we hadn't followed that path from its start was that someone from the National Trust had blocked said path off with a fence.
The nice lady's position wasn't helped by her refusal to look at my interactive map and she soon conceded defeat.
We followed the public footpath up past the castle and up the hill where there were some rather spectacular views to be had. You can see some of them by clicking here; as always I took a few photos as we walked.

It would have been good to have walked longer and further... but that was not on the cards for today. Probably just as well as the rain started as we drove home.
Once home there was a sausage sandwich for lunch and I had a minor victory. It has taken some effort and quite a bit of swearing, but I can now upload my NeonGeo field notes directly into logs via GSAK. I did so as part of today's geo-jasmer-calendar day. (I can speak fluent geocaching you know!).

I then took myself off to bed for the afternoon. A bit of dinner - time for the night shift...