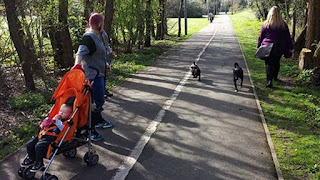 I woke feeling full of energy and raring to go only to see it was still dark and the clock said it was 3am. then dozed fitfully finally getting up (feeling like death warmed up) at 6.30am.

I had a look-see on-line over brekkie. The European Union in-out referendum debate continued to amaze me. Either staying in the EU or leaving the EU is a rather monumental decision. We (as a nation) need to make the right choice here. At the moment I'm leaning towards staying in purely because I've yet to see any valid reasons for leaving. But I am very much aware that my opinions are always in that of a vanishingly small minority. Last night I posted on Facebook that from what I've seen and heard over the last few months there are a *LOT* of good and valid reasons for staying in the EU (and several daft and invalid ones too), but *ALL* of the reasons I've seen for leaving boil down to the fact that those who want out don't seem to like foreigners very much.
I asked to be proved wrong.
Overnight I got a few replies, one from someone who was quite open in not liking the foreigners, a couple from people who would seem happier to take orders from Americans than from Europeans, and one who advocated leaving for the simple reason that the Government feels we should stay in (!). If the Prime Minister was to make the announcement that he spends a lot of time breathing I wonder how many people would then promptly die of asphyxiation as a point of principle.
Have I ever mentioned that I don't beleive in democracy?

I did see something that made me smile. In the past I've whinged about the organised jog-a-thon that effectively makes Viccie Park a no-go area every Saturday morning. It seems that there are simular runs organised across the country and one council in Stoke Gifford (it's in Gloucestershire) has decided to charge the joggers for the disruption they cause. The joggers are up in arms about it.
I don't know what the joggers in Stoke Gifford are like, but the ones in Viccie Park on a Saturday are generally rude and obnoxious; running six abreast, forcing everyone else off of the paths and swearing at other park users for daring to use the park. I wonder if the joggers have brought this on themselves?

I then had a look-see at my diary. I was rather amazed to see that I have stuff planned every weekend for the next few months (and that is pretty much both days of those weekends). At the moment I have one Saturday and one Sunday currently free between now and August. There's never a dull moment in my world.

I took "Furry Face TM" out for a walk. As we went past Asda there was a rather nervous looking woman. I say "nervous" - whe was twitching and seemed on the brink of tears. I asked if she was all right. She pointed at my dog (who was straggling some ten yards behind me) and said she had a really strong phobia of dogs. She looked *so* releived and was very thankful when I walked back and picked him up.
We met up with "Daddies Little Angel TM" and "Stormageddon - Bringer of Destruction TM" and walked off in the direction of Little Burton Farm. But when we were half way to our destination we reallised just how close we were to the American Diner. So we went and sat in the garden outside the place for twenty minutes. When we arrived I went inside and said we's like to order. The chap behind the counter gave us menus and said that they would take our order shortly. The place wasn't busy; there was only one table occupied inside. After twenty minutes we gave up waiting.
I do like the American Diner; the food is excellent. I *love* the ambience. But the service is so slow.

We came home via McDonalds where we got a chocolate milk shake each. I know the place has its critics, but there is very little waiting for McScoff.

I spent the afternoon in bed trying to get some sleep.... I'm off to the night shift now.