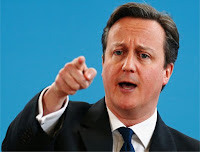 I woke rather earlier than I needed to. Trying not to wake my little dog (who was asleep on top of me) I got up and went downstairs for morning ablutions. Over brekkie I watched last night's episode of "Dad's Army" in which the Verger was being beastly in the vicar's bedroom. They don't write them like that any more. Which is probably for the best.
Just as I was setting off for work "er indoors TM" got up. She was rather scathing about my inability to find her geocache yesterday. Apparently she went out and checked up on it after I logged my failure, and shortly after that someone else logged that they had found it.. She showed me a photo of where I should have been. It didn't look familiar - the photo wasn't where I'd been. I think I got my geo-sums wrong. Woops.

I scraped the ice from the car and set off to work. As I drove the pundits on the radio were all a-twitter because the Prime Minister has made his tax affairs public. Since it had been revealed that not only was his father on the fiddle but the P.M himself had (allegedly) benefitted from his father's dealings he felt he had to do something to try to prove he hadn't got his hand in the till.
There is now uproar because his mother has recently given him a present of hundreds of thousands of pounds in cash. My first reaction was "so what?"; those with spare hundreds of thousands of pounds can do whatever they like with it. (Much as I'd like some of it)
But the pundits were asking if this was some sort of tax avoidance.

It transpires that if anyone's mum gives them a bung (*and* then lives for another seven years) then that's all very nice. That money is a present; the tax man doesn't get anything in inheritance tax.
(Inheritance tax being forty per cent of what you inherit -over a certain threshold)
But if anyone's mum croaks and leaves them money in her will then that money is fair game for inheritance tax.
I didn't know that subtle distinction. I'd never have thought of that. Which probably explains why I don't have any spare hundreds of thousands of pounds laying about.

This has given me some rather mercenary thoughts. My parents are both having major surgery in the near future. They wouldn't be having joint replacements and heart bypasses if the surgeons thought their numbers were up. Obviously they have a few years left in them. Perhaps I could convince them to make over their goods and chattels now so's I (and my brother) don't have to pay any inheritance tax.
Perhaps I might persuade them to work out what they are worth....

However I don't want to. It's not a nice thing to do, is it?
I then spent much of the long shift at work wondering if perhaps that's why I'm scraping a living working on a Sunday when everyone else is out and about; whilst other people are Conservative Prime Ministers being lambasted in the national press for their apparent greed at seemingly having done the tax man out of eighty thousand pounds.
Much as it pains me to admit, I always thought he was one of our better Prime Ministers up till now...