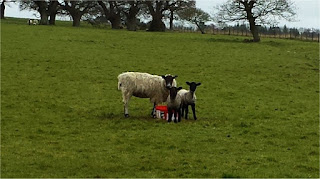 I did last night's night shift; as I did my thing I listened to Radio 4 Extra - plays, comedies, quizzes, documentaries and even an episode of the Twilight Zone. Not a bad way to spend the night really.
And with my thing done I came home along a rather circuitous route via Junction 11 of the M20. It was only five miles out of my way. But today was a geo-calendar day and with half a dozen caches in the area that I'd not found I thought this might maximise my chances of a find. Despite the rain I drove down there hoping it might dry up. It did.
I wasted five minutes trying to find one cache which had eluded me before. I still couldn't find it today. So I drove on for another half a mile and soon was doing the secret geo-thing watched only by some sheep.

I came home and said goodbye to "er indoors TM" and "Furry Face TM" as they went out. Ideally I would have been off out with them; a session of climbing trees had been arranged for today near Sevenoaks. But what with today being the day between two night shifts that wasn't a practical option, so I stayed home and sulked. It had been raining overnight, so I consoled myself with the thought that it wasn't really tree-climbing weather.

I had this plan to carry on disassembling broken fence panels and mowing the lawn and then have a spot of brekkie. It was a good plan. I got the lawn got mowed, and the broken fence panels are now in pieces ready to be loaded into my car to be taken to the tip. I'll do that tomorrow.
I then had the planned brekkie and tookk myself off to bed for the day.

Five hours later I woke, had a cuppa and watched a few episodes of "Red Dwarf VIII" on the "Dave" channel. Had I known it was on I would have recorded some episodes that had been on whilst I was asleep and watched those so I could fast-forward through the adverts.
"er indoors TM" and "Furry Face TM" still weren't home; the house is a lonely place without my little dog.

Time for another night shift....