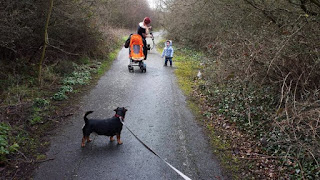 I slpet like a log last night; waking shortly before 7am to find myself cuddling my dog as though he was a teddy bear. He really should spend the night in his own bed. Mind you I was glad to have slept all night. Yesterday evening those of my friends who live about ten to fifteen miles away were telling tales (on social media) of epic storms. Either these storms never came my way or I slept through them.

Over brekkie I saw I now have a page of my own at a publishing house. I had a little smug smile about that.
I then made a few plans for a walk in Sussex that I will probably organise for some time in May. The walk will involve going underground...

I popped the lead onto "Furry Face TM" and we walked round to collect "Daddies Little Angel TM" and "Stormageddon - Bringer of Destruction TM". We had a little walk. I had some geo-maintenance to do in Park Farm and we all needed a walk so we combined the two.
As we walked we met a dog. "Winnie" was a black labrador who was friendly enough, but he was running loose. At one point he ran into the road as the cars swerved around him. His owner commented that he wished that Winnie wouldn't do that as Winnie had been run over by a car at Christmas time. I thought about suggesting the method by which I stop my dog getting flattened; namely a dog lead. But I thought better of saying anything. Some people do take the blindingly obvious to be intended as sarcasm.

Pausing only briefly to find one cache (today was a calendar day) we made our way home via the old A28.Today's picture above features that road. It is now effectively a footpath; to the right of Fudge you can see the white line that used to mark the centre of the road.
We stopped off at the bakery where "Daddies Little Angel TM" bought her old dad a cream bun, then said our goodbyes and I scoffed my cream bun over a cuppa. Very nice!

I took myself off to bed for the afternoon and made a point of putting "Furry Face TM" at the foot of the bed. If he is left downstairs during the day he just finds things at which to bark. After three hours I woke and then watched thee last two episodes of "Killjoys" which the SkyPlus box had recorded for me. It has been something of a variable series, but I hear they are making a second season.

I'm off to the niight shift now...