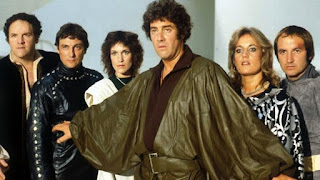 The last thing I did last night was to tighten up the straps on my CPAP machine; it's been a bit loose lately. With it fitting more snugly I slept like a log. Mind you I was *seriously* aching when I woke; I must have overdone the fetching and carrying at the weekend.

Over a spot of brekkie I watched last night's episode of "The Last Man on Earth"; the show started very well, but it seems to have rather lost its way at the moment. I then got a text from "My Boy TM" - he's on a little fishing holiday and he's caught a rather substantial haddock (as one does).
I also checked out my emails. Yesterday evening on our dog walk I put out the cache for my latest wheri-project (A Knight's Quest) and sent it in to the geo-feds for approval. The thing went live later yesterday evening and the local FTF-hunter ran straight for it out and was battling virtual trolls and rescuing virtual princesses in the park. He finally found the fiinal part shortly after midnight. If nothing else it has proved the thing works.
I've now not got any wherigos in progress. I have an idea for one based on the game of "Battleships" but can I be bothered making any more?
Much as I enjoy designing the things they are a *lot* of effort which is reallised by a very small number of people. Take my James bond themed one for example. It's been live for eight months and only four of the Kent-based cachers have found it. Or my Batman based one; I am very flattered that some people really have travelled hundreds of miles to do it; however the locals find it at the rate of one find per month.
I asked this very question on one of the geocaching groups several months ago. many people were very encouraging, but those locals who were the most vocal in telling me to continue haven't actually gone out and found any of the things in the meantime.

I left for work half an hour later than I did yesterday. The roads were so much busier. What a difference half an hour makes.
There was a surprise revelation on the radio that our old friend science had discovered that the asteroid that hit the Yucatan peninsula sixty five million years ago probably didn't do for the dinosaurs quite as comprehensively as we once thought it did. Science has supposedly recently discovered that dinosaurs were on the way out long before that. Or so the pundits on the radio claimed.
What winds me up is that this isn't news. I've known this for years.
Why does the radio presenters persist in touting established facts as news?

I got to work and spent a little while being preached at by the resident Christian. Why do these religious types always try to claim the moral high ground? Why does having an invisible friend make you a better person?
After a surprisingly busy day I made my way home and took my dog for a walk round the park. It was a lovely evening; the joggers were out in force. We met a few dogs as we walked but had no inciddents whatsoever. In fact the only fly in tonight's ointment was a tramp who seemed to be rather scared of "Furry Face TM".

Being Tuesday the clans actually did gather despite Matt's cough. We scoffed far too many sweeties, and bearring in mind Gareth Thomas had recently died we watched the first episode of Blake's Seven. Regular readers of thiss drivel may remember I've got that series on DVD and have watched it a few times.
It's a classic...