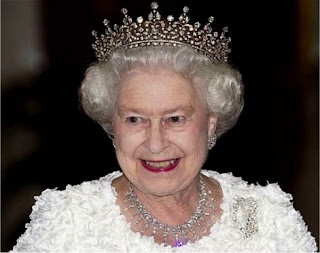 I woke in something of a panic. I'd been having a nightmare in which I was charged with supervising half a dozen illegal immigrants all of whom were akin to unruly children and thought that running away was a great joke. It was with something of a sense of releif that I woke to see it was 5.30am.
Over brekkie I watched another episode of "Plebs"; I think I'm quite getting into that show.

I then had a look-see on line. The morning's haul of emails included one from the power company. Last year I spent £465.69 on gas and £523.74 on leccie. Next year they estimate that over the entire year I shall spend fifteen quid more on leccie and eight quid less on gas. Bearing this in mind together with how they have operated over the years I expect they will increase the monthly direct debit by about ten quid.

The radio spewed its usual blend of drivel as I drove to work; I stopped off at Morrisons for cake. Being the Queen's birthday today we all brought in cake to work to celebrate. There are those who say the country can't afford a Monarchy. Those who say that are wrong. The most recent figures I can find show that the Queen was given £37.9 million in 2014-15 to do the Queening which was expected of her.
In the same year the revenue from the Royall Estates which was given to the Treasury totalled £285 million. So the country actually makes a profit of over two million pounds a year out of having a Queen.

I'm quite a strong supporter of Her Majesty. Mind you I have reservations about the next in line. Prince Charles today was broadcasting reading some Shakespearian tribute to his mother. Whilst it was probably amusing and touching *if* you are into Shakespeare, the vast majority of the population aren't. I for one was wondering what he was blathering on about.
The public (generally) love the Queen. I wonder if our future King has the common touch? I don't think he has.

We had been thinking off going for a little walk this evening. The Heaths Countryside Corridor people had organised an evening of newt-spotting. But by the time we'd got home and walked "Furry Face TM" my heart wasn't in it.
Instead I munched on a cheese scone and planned a little geo-excursion for Saturday morning whilst "er indoors TM" boiled up some dinner.
I shall scoff that in a minute...