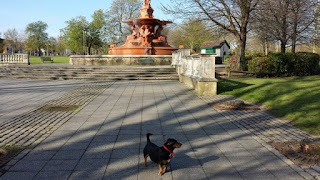 Yesterday I had a bit of a moan about a Christian. This morning over brekkie I found another one who wound me up. You can see the article which boiled my piss by clicking here (but be warned - it is full of adverts). Basically some American woman (with voices in her head?) feels that those who don't beleive in her god are fundamentally unable to express gratitude. Her reasoning goes something along the lines of her god is the only reason that good things happen. She is grateful for good things because they remind her of her god. However if you don't beleive in her god then there is nothing for which you need to be grateful. She has this theory that no one does anything good of their own accord; they only do it because her god propmts them to do so. Consequently those who don't beleive in her god are therefore unable to do anything good. (no - it doesn't make any sense to me either)
She went on at great length about the matter.
She's allowed to vote you know; and quite probably is eligible to serve on juries. Did I ever mention that I don't beleive in democracy?

I popped the lead onto "Furry Face TM" and we went for a little walk round the park. Whilst off the lead he played nicely with a beagle and the two scotties he usually terrorises, and on the way home (and on the lead) he nearly hung himself as he wrapped another dog's lead round his neck (several times).
Whilst out I created a place on Facebook. I must walk past the Hubert Fountain at least five times every week. So I created it on Facebook. There's quite a bit of history about the thing; you can read up about it if you are bored. I must admit to having a soft spot for the fountain ever since a seven-year old "Daddies Little Angel TM" fell into it. I did tell her not to reach over; I warned her. And when she fell in I did laugh.
I wonder if I've any photos of her in the fountain.

Once home I activated the dishwasher. I'm good like that. I then watched a bit of telly. "Plebs" is something I've been meaning to watch for some time; mainly because I like Joel Fry. It was quite entertaining; I've told the SkyPlus box to download more episodes.
I then set off to work. Ideally I would have spent today with "er indoors TM" visiting Canadian relatives, but I didn't even ask about getting the day off. I could see that wasn't practical.

And as is so often the case on the late starts everything worthy of note today happened before 11am...