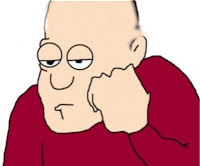 Having had plans for three of the days of  the long weekend, I'd not actually got round to thinking up something to do today. Last year on Easter Monday we took a picnic up to Caesar's camp, and then I met one of my grand-cats for the first time. The year before we had family over to visit on Easter Monday. And the three years before that were spent doing gardening. Interestingly it would seem that the weather on the last five Easter Mondays was (if not glorious) good enough to get out and about to do something.
Today we had nothing planned, and the weather was awful.

Over a spot of brekkie we turned on the telly. UK Gold were having a Wallace-and-Gromit-a-thon. And with precious little to do, I watched the antics of plasticine whilst fiddling about on my lap-top. As total boredom set in I got off my bum and scrubbed the bathroom ceiling before wasting much of the afternoon playing "Angry Birds" and "Words with Friends" whilst watching repeats of "Only Fools and Horses" on UK Gold. And when I could play no more games on Facebook I did some ironing. Being Bank Holiday there was no league bowling this evening, but "er indoors TM" had arranged to spend the evening with a bowling buddy so I was left "Home Alone".  I spent a couple of hours watching yet more repeats of "Only Fools and Horses" on UK Gold before turning over to "The Great St Trinian's Train Robbery". It wasn't as good as I remembered it. I then went back to what I'd done all day and watched an episode of "Rock and Chips" which I'd recorded onto the Sky Plus box a week or so ago. It turns out that  there are only three episodes of "Rock and Chips". Tonight I saw the third one. I've seen the first one a dozen times, and never seen the second one...

Having just had a really enjoyable three days I found today thoroughly depressing. With nothing planned, and heavy rain stopping anything being done outside, the day was pretty much a day wasted.