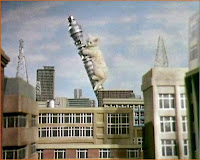 With a day to myself I could probably have done more with it. A spot of brekkie whilst the washing machine did it's thing, and then once I'd hung out the washing (leaving Sid and the most fruit of my loin in residence) I set off on a catalogue drop. I had planned to mow the lawn, but it was still rather damp: I thought I might mow it later.
Unloading catalogues  to the punters didn't take long, and so once back home I did my weekly search round employment agencies web sites. I probably applied for about two dozen jobs. Will anything come of it? Possibly: I got one personalised email back from an agency, and two phone calls from others. Here's hoping. By the time I'd been through all the employment agencies in my list my stomach was rumbling: it was gone 1pm.

A sandwich and an apple and I settled down in front of the telly. Over the weekend I'd borrowed a DVD compilation of old episodes of "The  Goodies", and I watched the giant kitten, the beanstalk, the crown jewels. I'd been warned that the episodes probably weren't going to be as good as I'd remembered them, but I was pleasantly surprised by the antics of  Tim, Graham and Bill. I had planned to mow the lawn, but a sudden downpour and thunderstorm put paid to that plan. Which was a shame, really. Instead I slept through episodes of Star Trek on the Sky Atlantic channel. A shame there are so many adverts; but you can't have everything.
Once I woke I activated  my lap-top and did a few on-line surveys; one of which was about writing a will. Did I think wills  were important? Should everyone have one? As the survey went on so I realised I was being somewhat hypocritical. I hadn't got a will.... Well; we drew one up years ago. It's now very much out of date, and lost as well. So I've stuck a will here. There's a link to it above. I've done a bit of research and I think that what I've done is as legally binding a will as any I would pay someone else to produce for me.
It's  quite simple, and being on-line here means it can't get lost and I don't have to  pay banks and solicitors to look after it for me. And being here, anyone who feels they have a vested interest in my estate can contest it with me directly, rather than squabbling about what my wishes were after I've croaked.
It sounds quite morbid really, but I suppose  it's something that needs to be sorted out.

The first fruit of my loin came home and clumped about the house for a while. Apparently he's in the throes of building a kennel for Fudge for when Fudge is in the garden. Talking of whom, Fudge is in trouble - he's eaten his collar.
And as he (the first fruit of my loin; not Fudge) went off on a mission so his sister (and Sid) returned, and we made vague plans for the weekend, as well as vague talk of a weekend in a caravan next year; which would be nice.
My beloved then phoned to say she was going out on the razzle with he mates and that I should boil myself up some scran. Whilst thinking about what scran I might boil up I wished that I'd taken up a friend's offer to go to the Wetherspoons curry night, and I worked on my novel.
Did I mention I'm writing a novel? It's  something that's been  at the back of my mind since the early 1980s. It's about.... well, to be honest I don't really know what it's about. I've always had this idea of how three characters might interact, one of whom isn't your average character. The trouble is that I have characters, but not plot or  title. However I have four pages and vague interest from a local publisher, so here's hoping something will come of it. I'd like to think that Hollywood will snap up the book once I've written the obvious successor to Harry Potter and the Twilight series. But realistically I know  that authors far better than me have not managed the success they deserve. I suppose, like with my paintings, that if I can cover my costs and my public is happy with what they get, then I will have achieved success.
Posted by Manky Badger at 7:51 pm