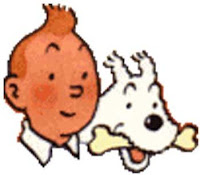 There's no denying that by the I'd sorted out the money from last night's astro club meeting it was rather late - by the time I crawled into my pit it was gone 1am. I was pleasantly surprised to find that (again) I slept though till 7am. I had a tiddle, thought I'd go back to bed for a few more minutes, and woke up at 10.30am.
The first fruit of my loin was grumbling - his 10.30am appointment hadn't turned up, and he wasn't happy. It must be a disappointment when your 10.30am doesn't show; it certainly was for him. He also had words to say about the workmen up the road. they would seem to have returned, and were making "bear racket". For those of my loyal readers who (like me) require translation, "bear racket" is not some form of ursine sports equipment - it is actually excessive noise. One lives and learns.

I then went out and collected the catalogues I delivered on Wednesday. We got most of the catalogues back. And at half the houses there was the catalogue I'd delivered as well as an identical catalogue someone else had delivered. The trouble with flogging Kleeneze is that there is no co-ordination between agents; no one has "a patch". It's a total free-for-all. there are (at least) three people operating within walking distance of my house. We need to find an area where there is no one doing this caper.

We then delivered last week's sales, and went up to the town. I had the proceeds of last night's astro club meeting to pay into the bank. Between membership renewals, tea money and a rather lucrative raffle there was over three hundred quid to go into the bank. I suppose that if the worst comes to the worst I can always embezzle the astro club funds. Mind you, if I'm going to embezzle the astro club funds the best time to do it would be whilst I had three hundred quid in used notes in my hand; not after I'd paid it into the bank and need two other people's signatures to get it back out again.
We then carried on wandering round the town, but I couldn't get home quick enough: it seemed to be "National Take Your Screaming Brat to Town Day" today. Ashford was awash with screaming, howling, whining horrors. Finishing off the shopping came as a blessed relief.

And so home, where I slobbed in front of the telly for a while whilst surfing the net on my laptop. I tried touting the painting I did yesterday on some local Facebook selling pages. I didn't shift the thing, but my beloved managed to get herself a free haircut from Facebook. It's amazing what you can do on social networking. And then the Bat arrived and treated us to a visit to Nandos to celebrate there being a "y" in the day. I'd not been to Nandos before. It's quite good.
And then, suitably replete, the clans gathered for the now traditional Saturday film night. First off we watched "Tintin". The animation and graphics were excellent. And then "Justice" with Nicholas Cage. A film which was surprisingly good.....
Posted by Manky Badger at 12:11 am