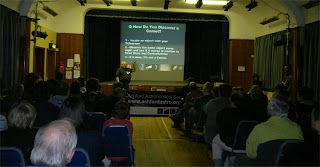 It was always my understanding that emergency service vehicles weren’t supposed to use their klaxons before 7am. I was woken by a particularly noisy police car which came shouting its way past my house shortly before 6am. Regular readers of this drivel will realise how unusual it is for me to sleep that late, and will sympathise with my frustration.

I lay awake for an hour or so, then realising that lying in bed unable to sleep was just winding me up I got up. And having stuffed some brekkie down my neck I started work. The opportunity to work from home doesn’t come along very often, so when it does it’s something I welcome. I had some paperwork to sort, and spent the morning sorting it. Just as I was finishing the phone rang. One of the many and various agencies with which I have had dealings was on the phone. Did I remember such and such a job that we spoke about? Could I attend an interview next week?
There’s no denying that this news cheered me up somewhat.

I then spent a little while preparing for interview. Researching the company, preparing answers for what they will probably ask me, finding out where I need to go (Sevenoaks). And then I suddenly had a revelation. It was sunny outside, and had been all day. It’s been raining for weeks, and rain is forecast for the next week. So with a dry day I got outside and mowed the lawn. My compost bin is getting full – I really need to do a tip run to empty it. Unless any of my gardening loyal readers want a dustbin full of rotting lawn clippings.

With little else going on I spent an hour working on my novel. And conscious of the effect that Wednesday’s writing had on my fragile mood I wrote a (relatively) uplifting bit; the epilogue. I’m quite pleased with it; but bearing in mind that this is only the first draft of the epilogue I expect it will change quite a bit.

And being the last Friday of the month, tonight was astro club. A wonderful evening. At one point I counted over sixty people, and more came after that. We started the evening with an update on the Kepler probe, then had a talk from one of the younger members on his home-made planetarium projector. The main feature of the evening was a fascinating wander round the various Messier objects that can be seen with even a pair of binoculars. And after I got very noisy hawking the raffle, we had a stellarium show of what we might see in the night sky if we lived further south. I learned loads, and spent truly quality time with many great friends.

And then home to count the takings. Because that’s what treasurers of astro clubs do. I always have a wry smile when counting the takings. One of our number is really generous and always puts a fiver in the tea money. As Treasurer I'd really like to thank whoever it is for this, but I would really like to ask whoever it is that they give the note to one of the people on duty in the kitchen rather than putting it into the money box - it is *really* tricky to get paper money out of the box without ripping it. It took me over ten minutes to tease the fiver out.
We do have a generous bunch at the asto club. Tomorrow we shall be banking over two hundred pounds from tonight's meeting. It's everyone's continued generosity which keeps the club going. We have (and are!) a great group. And I'm proud to be part of it...