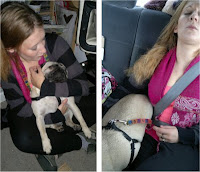 For no reason that I could determine, the womenfolk of the family had decided to go visiting family in Hastings today. With nothing else to do, I'd said I'd go along with them. So after checking the Internet to see what was new in the world over a spot of brekky, we set off. Or that is we set off once the most recent  fruit of my loin told me to put some pants on.

First of all to Westfield to visit my father-in-law. He's been incredibly supportive of my oil painting venture just lately, and we had a good chat. One or two ideas for subjects for future paintings, and he's suggested I might have a word with a local restaurant or hotel about exhibiting my paintings with them. The only problem is that I can't think of anywhere locally which might be interested.
If any of my loyal readers have any suggestions, I'd be all ears.

And then on to my brother's house. We found him outside painting it. Regular readers of this drivel may recall my whinging about the price of beer last week. My brother told me that the pub just up the road from him charges five pounds for a pint of lager. Five pounds!! And then my brother recited a list of pubs in the area which have closed down. At a fiver a pint, it's hardly surprising.
We stayed a while, Sid and Razzle (my dog-niece) either played nicely or fought; opinion was divided on what was happening. We exchanged insults and plans, and all too soon it was time to move on. I was conscious of forever chivvying the girls today; but with a list of places to be and a deadline, someone had to chivvy them.

To my brother-in-law's, where the most recent fruit of my loin obtained her second free phone of the day. She seemed to be collecting phones for no adequately explored reason. The out-laws are planning to go to an organised camping site in a few weeks' time. At nearly fifty quid a night I thought they were paying over the odds, but I suppose that is the going rate.

And then on to see my mum. Dad wasn't in: he was down the beach. He loves that fishing club. Mum was pleased to see us, and wasn't in the least put out when Sid's fart gassed the house out. That dog seriously needs some charcoal biscuits.

We said our goodbyes; four visits in four hours was (I thought) quite good going. And we set off to Folkestone to deliver the most recent fruit of my loin to its lair. I disagreed with the sat-nav on the way home and we went via Camber rather than via Brenzett. Looking at Google maps I'm not sure that I was right to have done this, but it made for a more scenic route for those of us who stayed awake to appreciate the scenery.
We got to the Admiralty, had a tiddle, and promptly set off again. Time was pressing. We gathered in some of the catalogues we didn't get yesterday. Today I banged on doors to ask for catalogues back. At seventy five pence a throw they are too pricey to write off. We got back more than I was expecting that way.

And then home. Whilst my beloved boiled up some scran I sat in front of the telly checking out the Internet on my lap-top. There was a huge crash at the front door, and the living room door burst open. Fudge stood in the doorway. He looked at me and I looked at him. After a few seconds I said hello to him, and he leapt over the lap-top full into my face. The first fruit of my loin followed Fudge into the room. They'd been to "Pets at Home" and had spoken with the resident vet. Fudge is to have his "boy bits" removed. We are reliably assured that this will be a relief for all concerned. Except for Fudge himself, I expect....
Posted by Manky Badger at 7:36 pm