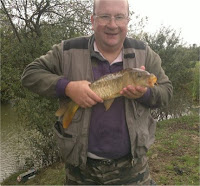 I woke at 5am this morning - less than an hour of laying around bored this morning. When not on a late start or a day off, my daily round is pretty much fixed - get up, ablute, hang the laundry round the radiators, twenty sit-ups, brekkie with Bob Ross, check my emails, and off to work. My morning scrape takes ten minutes, brekkie with Bob is half an hour, and checking emails is as long as it takes - the whole lot is done and dusted in far less than an hour. Which is why waking up at silly o'clock is such a pain - if I get up when I wake, there isn't enough to do to fill the time and I get bored.  Mind you, I get just as bored lying there waiting for time to pass. Perhaps next time the insomnia strikes I might get up and spend two hours playing "Angry Birds". Or maybe not. Maybe I could spend my time organising a fishing syndicate.....

There is an old axiom - "if you want a job done, give it to a busy person". I first heard this said of the chap who used to run my Boys Brigade Company. And over the years I've found it to be very true.  In theory if you have something that needs to be done, you should give it to someone who is less busy and has more time to devote to the task. But it's been my experience that it doesn't work that way. People with time on their hands seem to be content to fritter their lives away. Because that's the kind of guys (and gals) they are.

My counsellor mentioned yesterday that there is a reason why busy people are busy, and people with time to waste have time to waste. Apparently there are people who are happy to run themselves ragged to get something done, even when they are completely over-committed. And I (and she) think I am one of them. For example when camping there are those who will do the washing up once and loudly declare that they have done it. Me - I will build the campsite, wash up every meal and strike the campsite single handed and think nothing of it. There are few clubs and societies I have joined without ending up on the committee (I'm getting better at that one!). I am always early at an appointment. I was a scout leader for thirteen years.
Even today I was considering starting a university degree at a local college.
The counsellor lady seemed to think that this is a character flaw on my part that could be improved by counselling, and that I should try not to be one of life's do-ers. I should make a point relaxing and taking life easy. I've tried that in the past. I get bored.

Something which might ease the boredom is running a fishing syndicate. Regular readers of this drivel may recall that over the last two years I've been part of a syndicate that has secured fishing rights to a local small pond. It's not the best place in the world to fish, bit it certainly isn't the worst. It turns out that the chap who has organised the syndicate is looking to step down, and apparently "Yours Truly" is seen as the obvious person to take on the job.
Do I want to take it on? What would be involved? Collecting twenty quid from twenty (or so) people and taking the cash to the pond owner. Hardly an arduous job, but do I want to take it on? Well, the answer to that is a resounding "NO!!!". Quite frankly I don't want to do it. But if I don't do it, is there anybody else willing to take it on? Perhaps we (I) should get all members of the syndicate together and see if we can't get someone to run the show. However I have been told that if I don't take over running the show, no-one will. Perhaps I might give it a go for one year and see what happens...