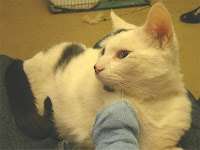 Having fallen asleep in front of the telly last night I woke with a stiff neck and a headache at 1.30am. A few hours sleep, and I was busting for a tiddle. How is that possible? Whilst out of my pit at silly o'clock I did the weekly weigh-in. No change this week. Still, no change is better than weight gain.
I went back to my pit and lay fitfully for a couple of hours. I was disturbed by a hammering on the door, and wend downstairs to find it was next door that had the visitor. And after another half hour wasted trying to sleep the phone rang. Someone was trying to sell me a legally binding will. I have a will - it's on this blog (see the link above). I told the bloke on the phone that I'd written my own will. He said that most home-written wills fail probate. I shall phone the probate office and find out why.

I wrote another chapter of my novel, and then the first fruit of my loin arrived with Fudge in tow. Or, more accurately, with Fudge towing him. We exchanged a few insults then all set off on our bikes round to collect the girls. Six of us then went for a bike ride. Not a particularly adventurous one this time, as Lacey is only five years old, and has a rather novel way of cycling. She can only cycle in straight lines, and can only stop by crashing into things. But notwithstanding the idiosyncrasies of her chosen method of cycling we made our way to the play park at Great Chart where one small girl and three rather large boys had great fun on the climbing frames. And then we got on our bikes and made our way to Viccy Park where we played on the zip lines until it started raining. The weather this morning had been glorious; and suddenly the rain was torrential. So we beat a hasty retreat home. There was dodgy five minutes when Lacey misjudged a corner and rebounded off of a tree. We had tears - shock more than anything else. And then back to the girls' place where we were treated to lunch. I do love a cheese baguette, and we mucked about for an hour or so until the rain eased off.

Home again - and back out again to collect the catalogues I'd delivered on Thursday. That didn't take long, but with the weather being decidedly changeable we came home. It looked really sunny outside so I thought about mowing the lawn. Then the hailstones came down with a vengeance, so I stayed in and worked on my novel. With seven and a half thousand words written I've stopped myself and I've now gone right back to the start and written a plan for the thing. It still needs a title, but one will come later I expect. These sorts of things usually do.

And after an hour playing "Angry Birds" the Bat arrived and we set off to Yeung's for a birthday meal. The Folkestonians were already there, and taking our seats with "The Man with no Alias" (patent pending) we had a wonderful time. However there is a problem with an "all you can eat" buffet - I can eat up to half an hour after the point at which I should have stopped, which makes for quite a spectacular guts ache. And having set off such a guts ache we went round to the birthday boy's house for a cuppa, and chatted into the early hours....
Posted by Manky Badger at 1:20 am