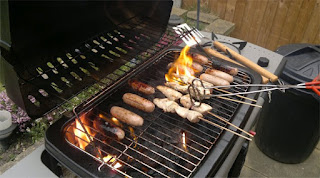 I do like where I live, but one of the drawbacks with the location is that it is right in the middle of the route that the lower orders take when staggering home from the night clubs to the pikier parts of town. And when staggering home, the lower orders seem incapable of talking quietly to their associates. And so I was woken at 3.40am this morning by two charming gentlemen bellowing swear words at each other.
I nodded off again, and had a minor lie-in. But not too much of a lie-in. The first fruit of my loin was due to be coming round at 9.30am. He arrived at 10am, and was worrying about my grand-dog. Fudge has been sick overnight for the last two nights. He would seem to have chirped up this morning, but one can't help but wonder what's up with the pup. I suspect the new wonder-dog-food he's being fed.

I then pretty much wasted the morning mucking about doing on-line surveys and playing "Angry Birds" before we popped up to town for a spot of shopping. I'd not really noticed it before, but the Park Mall shopping precinct isn't what it once was. I would say that over half the shops there are now closed down and empty. Surely it would make sense to the precinct’s owners to have shops open, if paying reduced rent, than to have the place deserted?
We went to Wilko's to get the makings of beer for the first of our summer camps. In better circumstances I would have gone to the Home Brew shop across town to support the local business. But in these austere times I am not going to spend twenty-two quid on that which I can buy for a tenner. Even if the Rear Admiral is going halves with me to share the costs. We then got some barby scoff from Lidl's and tried not to stare at the transvestite in Farm Foods.

And then took the barby stuff round to Steve and Sarah's where we barbied. Having barbied we watched the utter shambles that was this year's Oxford vs Cambridge boat race, and then the sci-fi movie "Paul". It was brill - I can't believe I'd not seen the film before. And just as the film finished the door bell rang, and we had a second round of barbie. A wonderful tea with wonderful friends. It was only a shame that the day was so overcast; yesterday had seen really good weather - today  was overcast and grotty. But we made the most of the evening. A really good evening - must do it again. Soon...
Posted by Manky Badger at 10:08 pm