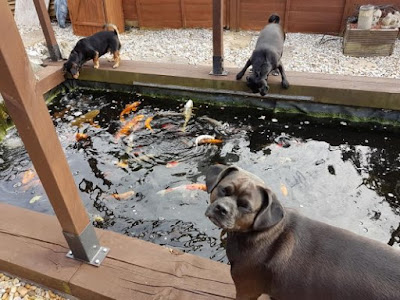 I slept like a log last night. This morning as I checked Facebook there were quite a lot less videos of the Thursday clapping from last night. There wasn’t any of it up our street last night. There would seem to be a growing sentiment against this Thursday clapping thing; the novelty is finally wearing off. Mind you, those that are doing it are doing it big-time. The video footage of the clap in my nephew’s street showed they all had their mates round to join in and social distancing was out the window as a mini-carnival was being staged. I pity any of the key workers that they were clapping who were trying to sleep in that street.

I got the dogs leaded up and drove them down to Orlestone woods where we had a rather good walk without meeting anyone as we walked. We came back to the car park to see something odd though. There was a family of four in a car. With their windows open I could hear them chatting about the birds they could see and the alpacas in the paddock nearby. They were excited at seeing the dogs, and the “boot dogs” trick really impressed them. I drove off rather slowly watching them in my mirror. They were showing no signs of leaving their car. Had they just driven to the car park for a bit of sightseeing?

I dropped the dogs at home and popped round to B&Q for some bits and bobs. Coronageddon-panic had subsided somewhat since I was last there, but they had a sign up saying NHS workers should show their ID badge at the till so that B&Q could show their appreciation. I showed my badge and jokingly said “please don’t clap; we’ve had enough of that“. With a straight face the woman behind the till said “yes – I think we all have”.
But they gave me ten per cent off of what I bought. Over the years the panels on the shed have warped and twisted, and there are a few baps between them. Rather than farting about replacing them, I got some filler, and once home I bodged the holes full of the stuff. Fortunately the holes were all at one end, and I got a coat of paint on to the other end of the shed. I could have painted the front as well I suppose, but I ached somewhat (presumably from the previous two days of painting?)

I took myself to bed for the afternoon. I didn’t sleep well. It was too hot, but I dozed fitfully for three hours before getting up and doing a little more painting. I’ve pretty much got all of the fencing done; just half of the shed to go now. I seem to have got it done far quicker this year than in previous years.
I fed the fish (to the delight of the dogs), and had another look-see at the Internet in case I’d mossed anything during the day.
I hadn’t.

With any luck "er indoors TM" will boil up some dinner in a bit, then I shall set off to work… The day before a night shift is always rather dull as I just loiter about waiting for time to pass.