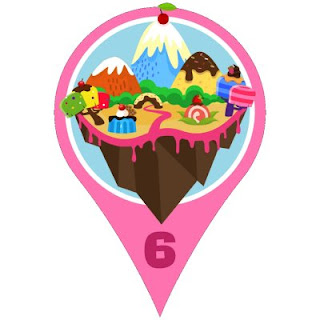 After a rather bad night in which I saw every hour of the night I was finally fast asleep when the alarm went off. I watched an episode of “Schitts Creek” whilst scoffing a bowl of granola, and as I scoffed so my phone was seemingly going frantic with a stream of notifications and messages.
I was hoping for great things to have happened on the internet overnight, but most of the messages were that people had found geocaches that I’d hidden. Some people had posted up some photos of what they’d been up to yesterday which I was glad to see (as I’m a rather nosey person). I sent out some birthday wishes to people having birthdays today, and seeing how "er indoors TM" had put a Skyland in the garden I captured it and three bouncers too (it’s a Munzee thing).

As I drove to work the pundits on the radio were talking about how ex-President Obama had publicly expressed his lack of confidence in President Trump's ability to handle the Presidency. It does seem odd that the USA have gone from one of their most respected presidents to one of the most internationally-laughed-about in a single bound.
There was also talk of how the Prime Minister has acknowledged that his speech to the nation last Sunday didn't quite come over as he had intended. He's admitted that had he been a little more clear then the public wouldn't be as confused as they are now.
Perhaps if he'd prepared a little more... or at all...?

Being a Sunday a lot of the talk on the radio was of a religious nature. Apparently a lot of the open-air drive-in cinemas in America are being used by churches during daylight hours now. You can't socially distance in a church, but at a drive-in cinema you can stay safely sealed in your car (away from the quite literally plague-ridden Great Unwashed) whilst the vicar shouts the platitudes at you via the loudspeakers that at night are used for the films.
It is a scheme which has proved to be rather popular if for no other reason than that the congregants don't have to pretend to be polite to each other as they never actually meet up. Unfortunately the delivery of the Holy Sacrament is proving to be problematical though. Experiments had been tried in which the righteous drove their cars up to the altar to receive Holy Communion through the driver's window (much like a McDonalds drive-through). However the Archbishop of Wisconsin and Milwaukee has put a stop to that as it "lacks reverence". It probably does, but since you can get a drive-through McDonalds but not a drive-through Holy Communion, there are those who've taken offence at having had their religious freedoms restricted and are suing the church leaders.
(You couldn't make this up, could you?)

There were several other stories of stark nonsense (that's religion for you!), but amazingly no one has asked the glaring religious question of the age. With humanity facing the worst pandemic in a century, where is God in all of this? Given that God exists (and that's a leap of faith in itself), God is demonstrably either unable or unwilling to do anything about this pandemic.
So I find myself wondering why do the righteous continue to suck up? I was religious in my past. I was a born-again happy-clappy Christian. I was a Steward in the Methodist church. But one day I realised that I didn't actually believe a word of it, and that I was having to make a *lot* of excuses for God.

I got to work and did my bit. Half way through the morning my colleague asked if I wanted her to mind the shop whilst I slipped off for the free brekkie that was available in the staff canteen. Always being up for free food I took her up on her offer and set off for a plate of scrambled egg and beans on toast. However I was told that I was too late for toast, so the nice lady slapped beans and scrambled egg on a slice of raw bread. Totally mistaking my look of utter amazement, she asked if I'd like a second slice of bread to make up for the lack of toast; she assured me it would be free. I thanked her, but declined her kind offer.
Beans and scrambled egg on raw bread wasn't as bad as it sounds.
As I forced it down so my phone beeped. The nice people in China from whom I'd yet to receive those Lego road plates I ordered months ago were rather upset to hear I'd not received anything and offered me a refund. I took them up on the offer - I wonder if they will actually stump up the money?

With work done I came home and took the dogs for a little walk round the park. As we walked we met Chrissie and Ethan; I was almost on top of them before I recognised them; I was miles away. It was good to catch up.
Fudge got told off by another dog for attempting to “do the dirty deed”, and each time that we did “sit” to cross a road, someone or other would comment on how well-behaved the dogs were. Not a bad walk.