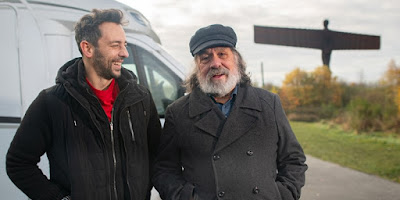 I slept like a log last night, but I still wasn’t feeling on top form when I woke. I made myself a bowl of granola and scoffed it whilst watching an episode of “Schitt’s Creek” in the hope I might perk up.
With telly watched I had a little look at the Internet. This time last week I mentioned that I’d reported a porn-monger to Facebook. A profile linking to mucky sites asked to befriend me, so I squealed them up to the Facebook feds. A week later that site is still active. Amazing how advertising graphic sex doesn’t go against the Facebook “community standards”, isn’t it? But other that his/her/its non-removal, not a lot had happened on Facebook overnight. I sent out four birthday greetings, then had a look at my emails.
They too were equally dull.
I captured bouncers in the tree house and the Skyland (it’s a Munzee thing) and got ready for work.

As I drove to work the pundits on the radio were interviewing the head honcho of some airline or other. This bloke was banging on about how all the public should be wearing face masks to prevent the spread of coronavirus. Apparently wearing masks reduces the risk by ninety-eight point five per cent (or so this bloke claimed).
They then wheeled on professor doctor someone-or-other who asked  what specific risk had been lowered by ninety-eight point five per cent (spreading the virus, contracting the disease, getting run over by a bus... it could have been the risk of absolutely anything), and what evidence there was to support this utterly unsubstantiated claim. The airline bloke didn't know; he'd just heard something somewhere that mentioned ninety-eight point five per cent. Presumably he'd totally misunderstood what was going on and seemingly made up the rest. But he was insistent that because he'd heard it somewhere, it had to be true.
This was followed by an interview with some transport manager (it was a bit vague as to exactly what it was that he managed) who said that he'd heard that there was no real evidence that wearing face masks actually achieved anything , but since everyone else was wearing them, he would as well. Apparently that "stood to reason" and "made sense".
I took a deep breath.
For thousands of years it was common knowledge that the world was flat because that too "stood to reason" and "made sense".  I've mentioned before that the stupidity of my fellow humans never fails to amaze me; and none more so than that which is broadcast live on national radio.
This was followed by the "Thought for the Day" section which I thought was rather apt considering my rant of yesterday. Some leading Methodist went on (very earnestly) about seeing how God had failed the righteous in countless historical disasters in the past, why should God do anything about Coronageddon? Apparently standing idly by and watching calamity unfold is what God does best, and anyone who expects anything more doesn't really understand what God is all about. It would seem that completely letting down a believer's faith is in itself a test of faith
One lives and learns... the convoluted logic that the righteous employ to make excuses for the failings of their God have to be heard to be believed...

I got to work; I deployed a few Munzees and got on with my work. And with work done I came home again. As I do.
"er indoors TM" boiled up a rather good bit of dinner which we scoffed whilst watching “Ricky and Ralf’s Very Northern Road Trip” which was rather good.
I think I’ll have another early night – yesterday I mentioned I wasn’t feeling that good; I’m still feeling a tad ropey…