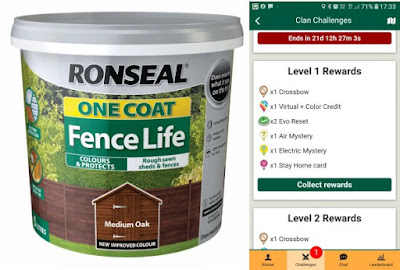 I didn’t sleep at all well. Fudge wanted to come upstairs last night so "er indoors TM" carried him up, and I lay awake for most of the night listening out for his cries. He made quite a few slurping sucking noises, but other than that he had a peaceful night.
I eventually gave up trying to sleep and lay on the floor with him until the pain in my back got too much, then I came downstairs for toast and my usual rummage round the Internet. Pretty much nothing had happened overnight, and with no emails of note I spent half an hour writing up CPD.

Bearing in mind that the wooden sleepers round the pond were looking a tad shabby I gave them a lick of paint, and flushed with enthusiasm I popped round to B&Q to get more fence paint. The queue was rather horrendous, but judicious brandishing of an NHS staff card got me in the place right away. Amazingly they had trollies that had been cleaned to which I was directed. I’d not seen anywhere else do that.
I got three tubs of fence stain. For all that the stuff claims to be “one coat – lasts up to five years” it has been my experience that one coat lasts about eighteen months before the fence looks as though it needs going over again.

I came home and went into the garden. Fudge lead the charge of dogs up the garden, and looked incredibly sheepish when I shouted at him. He doesn’t help himself. As I painted fence panels so "er indoors TM" put a coat onto Fudge. He hates wearing a coat, and the subsequent sulk slowed him right down.
I got two panels done. Over the years I’ve found that I can (on average) paint one fence panel per hour. I use a paintbrush (as God intended); I’ve got one of those spray gadgets but it’s been my experience that it sprays paint everywhere except on the panel you are trying to paint.

"er indoors TM" dished up a very good lunch of a cuppa and home-made Chelsea buns, and having scoffed them I spent an hour or so re-arranging my Lego town. We then set off to Folkestone to collect "Stormageddon - Bringer of Destruction TM" and transport him to Margate. Now far be it from me to cast aspersions on my most recent grandchild, but the driver side rear window of my car was working fine when we left Folkestone, and it was utterly poggered when we reached Margate.
Oh, how I laughed.
We came home via Faversham for virtual Munzee-ing purposes. The munzee-ing was virtual so we didn’t have to leave the car. I didn’t want to leave the car – I’ve spent the last two days in the garden in the baking sunshine; today was overcast, cold and raining.

Once home we had a rather good bit of dinner washed down by a frankly disappointing bottle of wine. Having shelled out a fiver for some rather good bottles of the red stuff recently, I was expecting more from the stuff that set me back a tenner.
Once we scoffed we had a Zoom meet-up with friends. For all that the world is in lock-down I’m seeing a lot more of some friends than I have for years.

Oh – and the Prime Minister made a proclamation about the ongoing coronageddon crisis this evening. He spoke for ten minutes without actually saying anything.
I can’t help but wonder if the Prime Minister has pissed on his chips; having been seen as the saviour of the nation after the Brexit debacle he was ideally placed to go down in history with Churchill and Lloyd George. He should (and realistically could) have laid down the law and would have been respected for it. (Margaret Thatcher did it when she kicked the unions in the knackers). But tonight’s broadcast was all “please please please” where he should have said “do as I say, dogbreath!”.
I’ve mentioned before that Mr Johnson fulfils the office of Prime Minister in much the same way that Zaphod Beeblebrox carried out the office of Galactic president. Not actually wielding any power, but drawing attention away from power…