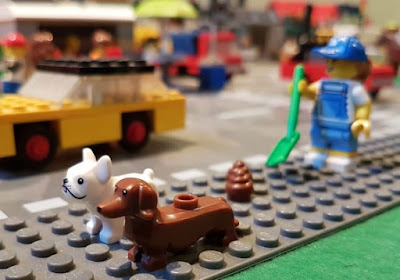 I slept like a log. Over a bowl of granola I watched an episode of “Schitts Creek” then had a quick look at the Internet to see if I’d missed much overnight.
There was quite a bit of nastiness being banded about on the Geocaching UK Facebook page. For a hobby that can be quite fun and through which I’ve made a lot of good friends, it never fails to amaze me just how horrible and nasty the people who post on the national page can be. I can’t help but wonder why.
I chased up the refund for the Lego plates which never arrived, and got ready for work.

As I drove to work the pundits on the radio were talking about the effects of the pandemic on the economy. Pretty much every so-called expert who was wheeled on seemed to be crystal clear that whilst all the deaths have been sad, the detrimental effect on the economy is far more serious and far more concerning. Pounds over people every time...
A very sad reflection on our society...
Thre was then talk about how President Trump is openly and loudly advocating the use of hydroxychloroquinine as an anti-viral agent (even though its only advocate of the stuff is him). He told the world how he's taking it to prevent him getting the virus. There was a lot of discussion about why he's making such a song and dance about the stuff; it is claimed he's got no vested interest, so what is going on?

I thought about popping to Sainsburys before work, but "er indoors TM" now has a working car, and I would seem to have spent several hundred quid over the last month on shopping we didn't need, so I decided against it. Instead I went in to the works car park, deployed a Munzee (as one does) and did my bit at work.
Work was much the same as ever, but as the day wore on I wondered if I shouldn’t have gone shopping after all.

I came home via Aldi, which was the quietest I’ve seen it for a long time. I bought some uncooked bread stuff (I like that) and a couple of bottles of red wine (I like that too) and came home to an empty house. "er indoors TM" had taken the hounds out. But some of the Lego that I’d ordered at the weekend had arrived. Lego Fudge and Lego Sid together with Lego "Daddy’s Little Angel TM" and a shovel for the Lego turds.
"er indoors TM" came home and boiled up a very good bit of dinner which we washed down with one of the bottles of plonk that I’d bought on the way home. I followed it up with a couple of glasses of salted caramel vodka.
I’m not sure the last glass was a good idea…