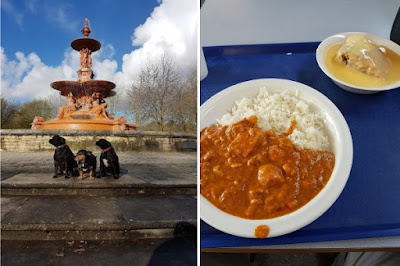 I slept for over seven hours last night, but woke with a rather bad headache. What was that all about?
Over a bit of toast I had a look at the Internet. Interestingly whoever it was who had been making the snarky comments on my new geocaches had deleted them overnight. The arrogance of people with this attitude amaze me. Despite others having no problems in solving a puzzle, this one took the line that if she can’t solve the puzzle then it is clearly impossible (!) and that I had made a mistake in the puzzle’s construction. I looked up this person’s geo-profile on the internet and my piss boiled. She’s found over twice as many film pots under rocks as I have (and I’ve found nearly eleven thousand). However she’s only ever hidden seventeen of the things (I’ve hidden over two hundred and fifty), of which several have been archived, and none have been hidden in the last three years. And to add insult to injury she lives a hundred miles and a two-hour drive from Kings wood so she ain’t going to be rummaging in the undergrowth for that cache any time soon.
I whinged about this (in general terms) on a Facebook page for people who rummage under rocks locally. It would seem I’m not the only hider-of Tupperware who finds this.

I got dressed, which isn’t an easy task. As I got myself together so Treacle scrapped with Pogo in a shallow attempt to lull me into a false sense of security. When she thought I wasn’t paying attention she made a bid for my socks. But I was too quick for her.
And then we came downstairs…
Coming down the stairs is something of an art form. I walk. Using my legs. Pogo and Treacle slide down on their chests using their legs and mouths to conduct a battle as they go. I wish they wouldn’t.

We then went for our morning constitutional, but in the reverse way to that in which we usually go. As we walked through the park we all had a poo. I cleaned up that which Pogo and Treacle had dumped. Before I could stop him, Pogo cleaned up Fudge’s. Foul creature.
Mind you, apart from eating dung, the walk passed off reasonably well. We did have one fight with a Beagle near the car park, but the nice lady with the Beagle understood how dogs’ brains work. And (to be fair) the Beagle gave a good account of himself.

Once home I sat on the sofa, sparked up my lap-top, and did the last video lectures on my course on plants. In retrospect it was all very interesting, but it was about “what a plant knows”. I really wanted to find out about plant biology. Perhaps I’ll do another course in a little while.
I looked at doing the end of course quiz, but thought better of it. Having had a message from Cheryl I spent five minutes getting a Turkish visa. To answer the questions to get the visa I needed my passport. I found I’d stashed thirty-five Euros in there. I’d forgotten about those. Result !!

As I drove to work I found myself thinking about that Turkish visa I'd just bought. Twenty quid just to be able to enter their country... it's a bit of a rip-off isn't it? It's not as though the application process actually checked anything. I just typed in my details, gave them my money, and I had the visa in my hand (well, in my in-box) right away.
But then the whole "visa thing" is a bit of a con, isn't I? Good money for absolutely nothing. To think that a lot of people voted for Brexit just so we could have a daft system like this for more international destinations... not that they actually realised it at the time(!)
I stopped off at Detling village on my way to work. There is a geocache there that hadn't been found for a year. With no other film pots under any rock within the best part of a mile of it, it doesn't get many visitors. But it made for a good morning walk through some rather pretty woods running alongside the motorway.
To think I drive within fifty yards of that place every day.

With a little spare time I went to get petrol. I could have lasted till tomorrow. Looking back I think I should have done. When I was walking back to my car after having paid, there was a minor contretemps on the petrol station's forecourt. Some idiot was trying to drive his car through where everyone else was getting petrol at the pumps. Apparently there wouldn't have been a problem if I hadn't left my car where it was when I walked off to pay for my petrol - by doing so I was blocking everyone(!) No one else seemed in any way blocked or bothered - everyone else was happily getting petrol. I smiled sweetly and drove off, leaving the idiot demanding that everyone else get out of his way. It would seem that he was utterly oblivious to what goes on at a petrol station.
Why do I attract these loonies?

I got to work. there was curry for dinner in the canteen. I scoffed a plateful, and followed it with jam roly-poly and custard.
After a rather full morning and a heavy lunch I spent the late shift wishing I could have gone to bed...
And then I got a message.

A good friend was minding her own business when a van reversed over her. Arm, leg and nine ribs broken. It has certainly made me think - you can be quietly doing your own thing with nothing more than a looney at the petrol station to contend with, and begrudging twenty quid for a visa to go to your own son's wedding when suddenly your entire world gets turned upside down...