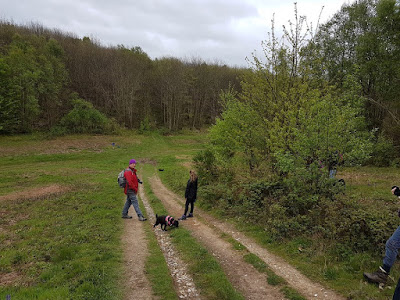 I slept like a log, for which I was grateful. Over brekkie I downloaded my latest Wherigo (as one does) and was utterly unable to get it to fail in the way that I was told it failed over the last few days. Perhaps I *had* fixed it properly? So why did it play up recently?
I made some toast. As I scoffed it I saw that absolutely nothing had happened in cyber-space overnight, which was for the best. "er indoors TM" announced that she’d fiddled with the house wi-fi and our broadband speed was now officially “fast”. She quoted some numbers and letters and acronyms, but it meant nothing to me. I smiled and pretended to be impressed. I find it makes life easier for me to do that.

We got ourselves and the dogs organised, and set off for the church at Stelling where we met Karl, Tracey and Charlotte. The dogs howled and barked in excitement, and after we’d rummaged round the telegraph pole looking for film pots we set off. We hadn’t gone far when we met some caching friends we’d not seen for ages. It was good to walk together and catch up.
We were soon off of the roads and onto the fields; Treacle was soon doing her trademark move of carrying a stick which was far bigger than she was.
The ground was a tad wetter than it has been recently; we slipped and slided a few times as we walked through some rather pretty woods. It was in these woods that we lost Fudge. The voices in his head said for him to run, and run he did. I eventually captured him scrubbling at a rabbit hole a couple of hundred yards into the woods.

The woods gave way to lanes, and we found ourselves in Bossingham a little earlier than planned. We sat in the bus shelter and scoffed lunch whilst waiting for the pub to open. Our friends carried on at this point. In retrospect they should have stayed with us. It was then that the heavens opened, and it poured hard. We took shelter, but three pints later the weather cheered up. We carried on with our walk.
​On the second half of our walk we met sheep and some youngsters doing their Duke of Edinburgh’s Award. We climbed trees. We carried three dogs over seemingly endless stiles.
It was only a shame that Fudge felt he had to disappear into the crops again.
It was a good walk – I took quite a few photos.

As we walked I was keeping a close eye on Pogo. He still pulls like a train when he wants to walk with Treacle and "er indoors TM", but he sat every time his lead went on or off, and he was far better with the other dogs that we met today than he has been before. Dear Pogo is still something of a “work in progress”; he’s such a sweet dog; he doesn’t realise what a big lump he is.

Caching-wise I must admit that the hides weren’t as easy as I would have made them. But that’s not necessarily a bad thing. However we did have a minor hiccup. At one point we crossed a fence which did look to be somewhat “heavy duty”. It was only a couple of miles later as we were leaving these woods that we saw a sign saying “Private Land No Geocashing”. Whoops!

We came home; bearing in mind our last four walks have been over ten miles long I didn’t feel anywhere near as tired as I have done recently after our walks. Mind you I think the dogs felt it. With "er indoors TM" off to the film night I set the washing machine loose on my smalls, then all three dogs snored as I watched the telly. Last week’s episode of “Victoria” was rather good, then I watched another episode of “Fleabag” in which Fleabag nearly porked the priest. She would have done so had God not put the kibosh on her immorality. Something God could do with doing a tad more often perhaps…?

As the tumble-drier screamed about my undercrackers I did the monthly household accounts. My bank balance *could* be better, but it could certainly be a whole lot worse. Mind you I suspect I might not be thinking this in a month or so… holidays, family weddings, a shower tap to have fixed, and the tumble drier actually screams when we use it.
Still, what is money for if not to squander on new tumble driers?