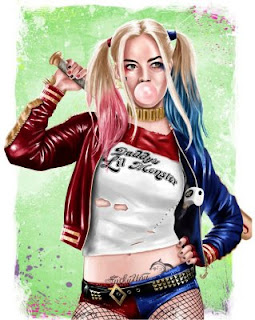 As I drove home from the night shift the pundits on the radio were talking about how the Prime Minister has managed to get yet another extension to Brexit. The UK now has until Hallowe’en to come up with some sort of formal arrangement that the EU might buy. However with her own plan dead in the water and having clearly given up on her own party and now sucking up to the Labour party, you can’t help but wonder what she is thinking of.

I came home, and took the dogs round the park. We found the young ladies of the Jehovah’s Witnesses lurking up by the bowling alley. With legs all the way up to their bums and more make-up than sense I’m afraid that the phrase “painted Jezebel” came to mind. They gave me the fluttering eyelashes, and told me about a party that they were having, and how they would be so pleased if I could go along. And just at the point where most men would have been putty in their (elegantly manicured) hands they came out with all the Jesus stuff. However either being made of sterner stuff or having to deal with a king-sized Pogo-turd allowed me to steel myself away from their allures. They then started fussing Fudge, but he wasn’t having any of it.
As we came up to the Hubert fountain we encountered a hysterical old biddy. She was distraught that the dogs were fighting. I suppose that (to the uninitiated) Pogo and Treacle’s scraps must appear rather frightening. They are rather aggressive to each other, and there is a *lot* of growling and snarling. But that’s what they do. It is all in play. But then again, they are my dogs. I know what they are like, and if it is *truly* nasty I stop the game. If they are playing I let them play. This old duck didn’t believe it was play.
Bless her.

We came home; I set the alarm for late afternoon and went to bed. I woke at mid-day. I scoffed a late brekkie, then did a couple of hours of ironing whilst watching a film. I was pleased to see that “Suicide Squad” was now on Netflix. It is a film I’ve been wanting to watch for ages. It was disappointing. It took over half the film to set the scene, and rather than having a plot of its own, it just used the plot of the Alexei Sayle blockbuster “Things Exploding”.

I then spent a while fighting with GSAK (as one does) in an attempt to wrestle a GPX file into “Hannah”. It took some doing. As my file compiled I messed about with my phone. My contract has ended and I *could* get a new one. But bearing in mind that there is nothing wrong with the old phone I might just downgrade to a cheaper “pay as you go” sort of arrangement. In the meantime I’m clearing out all the apps I don’t use and generally tweaking it up. Last night during the night shift I ordered some new screen protectors from Amazon. The advert said they would be here today. At five o’clock in the afternoon I got an email saying they had just been dispatched. So much for next day delivery.

"er indoors TM" boiled up a rather good bit of dinner which we scoffed whilst watching “Derry Girls”. I *really* should have an early night.