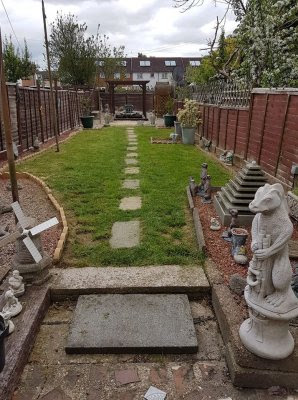 I slept like a log last night even if I did have to fight for my share of the duvet. I eventually got up at nine o’clock. Nine o’clock – that was a result.
I made some toast and peered into the Internet. Facebook told me three friends were having birthdays today – I sent my usual birthday message. Seeing how nothing much had changed overnight on that website I had a look at my emails. I had forty-three emails about finds a couple of friend had made on the series of geocaches I put round Godinton last month. Forty-three? There are twenty-two caches there and two people… that should be forty-four emails?
I then looked at the geo-map and got a bit cross. Planning for next weekend’s adventure I saw a geo-puzzle on the map. I saw that I’d written something in the notes section, so it was plain (from what I’d written) that I’d solved it before. Such a shame that I hadn’t written down the actual solution… Eventually herculean brain-strain came up with the answer.

​I went into the garden and harvested the dog dung. I fetched in loads. Then I found some more. Having fetched in a second load my furry associated realised what I was doing, and they all created some more for me.
Finally having cleared the lawn I went round the edges pulling out weeds. A simple enough task; it took over an hour to do. "My Boy TM" then called round and drove us round to B&Q. I needed some new bedding plants for the garden pots. I wanted to replace the palm tree that never really took off last year. By the time I’d also bought a new outside light I’d squandered over sixty quid.
It was ironic that we came home just as the rain was starting.

We had a spot of lunch, and I geo-puzzled until the rain stopped. Bearing in mind that the wolf-pack was getting rather fractious we took them round the park. Perhaps it was having "er indoors TM" along, but the walk passed off without incident. There were no itinerant nutters roaming the park, we had no fights… the walk was as every walk should be.
We came home, and I cracked on in the garden. I got the new plants potted, I trimmed the lawn edges and mowed the lawn. I even got the new solar-powered motion-sensing light into place.
After six hours effort the garden looked just the same as when I’d started. Have I ever mentioned that I hate gardening?

"er indoors TM" boiled up a very good bit of dinner, We washed it down with a bottle of plonk whilst watching last week’s episode of “The Orville”. Again “The Orville” took a story which had been done twenty years ago in “Star Trek” and did it better.
For a day with nothing planned, I’ve been rather busy.