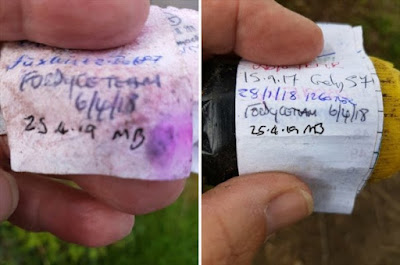 I slept reasonably well, but despite a relatively early night I still woke feeling like death warmed up.
Fudge sat with me as I scoffed my toast; he had some of the crusts. He also ate his breakfast for once. I just can’t get used to a dog that isn’t incredibly greedy.
I had my morning’s rummage in cyber-space. I sent birthday wishes to friends, then I saw something which is perhaps a sign of our times? An author I follow had posted on Facebook whinging about a one-star review he’d received on Amazon on one of his books. I follow several authors on Facebook and all whinge about the injustice of getting a poor Amazon review. However by the same token as a reader I dislike buying a book on the strength of all the good reviews only to find that the book is crap. Who actually writes these reviews? I know of one author whose books have quite a few very good reviews from people who’ve never actually read them. Amazon book reviews isn’t really a system that works.
I also had a load of emails about “Found It” logs on the geocaches that I hid recently. It would seem that despite only having been out for a month, one is already broken. Oh well… Kings Wood is a good place to walk. I’ll take a look next week (hopefully before the self-appointed geo-police get involved).

I thought about walking the dogs up to Kings Wood, but instead decided to do the park circuit. As we walked to the co-op field I saw one or two other cars and vans which had been clamped by the DVLA (like the one outside my house). One of them was the van of a local business – being clamped for non-payment of road tax is hardly good advertising, is it?
Apart from Fudge straggling we had a rather good walk… right up to the part where we had to put leads back on. As I called her, Treacle defiantly ran into the mire of the swamp at Bowen’s field. When I finally got her back I saw (and smelled) that she had been rolling in fox shit. Pogo (who had been *incredibly* well-behaved right up to that point was also very reluctant to come to have his lead put on. He too was covered in fox poo. Amazingly Fudge was clean.

We came home, and I scrubbed the dogs. Over the years I’ve heard about tomato ketchup getting fox poo off of dogs. I thought I might give it a go. It wasn’t any worse than dog shampoo, and the dogs did smell a little better afterwards.
We all then went into the garden; some of us needed to dry off. I fed the pond fish; that one which was on death’s door at the weekend seems to be fine now. I then spent five minutes harvesting all the dog turds. I only did that job a day or so ago. How can three small dogs crap so much? Especially bearing in mind the rate at which we get through black poo sacks when we are out.

With the dogs all snoring I quietly left. I'd looked at the geo-map and had located a couple of geocaches (amazingly within two hundred yards of each other) that hadn't been found in over a year. They were both fairly close to work. Could I go for a double resuscitation?
As I drove there was an adaptation of the diaries of Adrian Mole on the radio. Much as I like Adrian Mole, the chap reading the diary didn't sound quite how I imagine Adrian Mole would sound. Adaptations of books rarely do turn out quite how you picture them to be.
On my way I went past the most beautiful house. It was by such a pretty lake. If it was mine I could have fished from within yards of the kitchen window. There was a large car park - I could open a little fishery there. I pulled up and spent a few minutes admiring the view and enviously wishing that I lived there. And then I watched a hearse pull up in front of the house. Loads of very somberly-dressed people came out of the house. Some were openly sobbing. They might have a wonderful place to live, but their lives aren't entirely a bed of roses.
I got to where the sat-nav said I was supposed to be - I rummaged by a footpath marker and found what I was after. I went on a short distance, and scrubbled around a fence post and was again rewarded with a scruffy little pot. I'd found both of my geo-targets. Two resuscitations. Happy dance.
For me...
I somehow doubt that those at the funeral would have been so easily amused.

I set off toward Aylesford where I eventually got some petrol. Again the entire petrol station had been brought to a standstill by idiotic parking. I don't understand how some people's brains work. You stop at the petrol pump. You get petrol. You either pay at the pump or you pay at the kiosk. You then go away. You *don't* park idiotically across the forecourt stopping all the other cars from to leave the petrol station and then dither about.
Do you?

I got to work. A plate of chicken and chips set me up for the late shift. It must be some time since I had McDinner before a late shift. To be honest I much prefer the hospital canteen.

I got on with the late shift. It was rather interesting for reasons that I might blog about elsewhere at some point.
I like the late start of the late shift so I can have the morning to myself. But I’m not keen on the late finish.