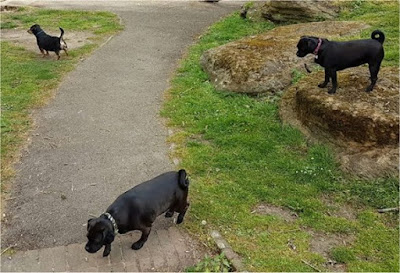 I had a rather good night’s sleep; it was a shame that the bin men had to be *quite* so noisy as they moved the bins ready for the bn lorry which followed them over two hours later. I got back to sleep, and was woken shortly after by Treacle being sick.
Oh well, it was getting-up time anyway.

Over brekkie I spent a little while looking at the geo-map planning a walk for the weekend. We’ve walked most of the geo-walks locally; there’s not many left for us to do. Mind you as I looked at the map my piss boiled somewhat. There are huge areas of Kent where people *could* put out geo-walks; long ones, short ones, it is such a shame that more people don’t. Looking at the profiles of people who’ve logged finds on local geocaches I read “Found 2000+, hidden none”, “Found 3000+, hidden none”, “Found 6000+, hidden four”. Whilst there is no obligation for anyone to stick a film pot under a rock, the hobby will fall flat on its face if people don’t.

For once, nothing was kicking off on Facebook, and with no emails worth the electricity to send, I got the dogs on their leads and we went out. Our walk round the park was wonderful. I herded Fudge along, and without his straggling we got round twenty minutes faster than usual. We had no fights and no shouting at other dogs at all. Treacle tried to roll in a dead rat but missed. Pogo and Fudge tried to hump a passing Labrador, but this was just laughed off. Dog-walking people are odd. They get the right hump when a dog barks at their dog but laugh when their dog gets porked by another. With people it is (usually) the other way round.
We got home just before the drizzle started. I fed the pond fish. The one which looked ill earlier in the week (and had made a remarkable recovery) was floating belly-up on the surface. Usually at fish-feeding time the dogs try to get the fish food. Today they were all straining to get the dead fish, so I removed it before one (or all of them) fell in.

I hung out the washing that I’d fed to the washing machine, and seeing how all the dogs were fast asleep I set off in the vague direction of Tunbridge Wells. I took a rather circuitous route to work. As I drove "Women's Hour" was on the radio. They were talking about environmental matters - did you know that the term "Tree Hugger" comes from an Indian organisation. I've always used the term somewhat pejoratively; one lives and learns.

I got to work; being Friday I scoffed fish and chips in the works canteen. Very tasty.​ I then got of with work. What with the vagaries of night and weekend work I rarely work a full five consecutive days. I have this week; I felt it was perhaps too much... I prefer my odd hours and mid-week breaks.