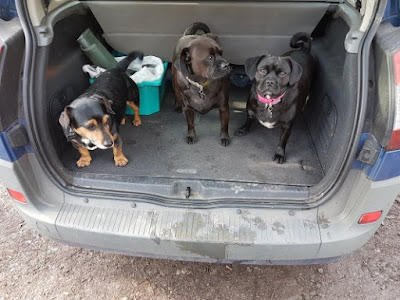 I woke perhaps a tad earlier than I might have done. Over a bowl of granola I watched the last episode of the second season of “Uncle”. Wikipedia says there is a third season. I shall have to look out for that.
I sorted the undercrackers before the dogs woke and put them in piles on the table. The dogs came down, and when she thought no one was looking Treacle made a few attempts to make off with my pants. Brave dog – I think twice about going near those things.

We were just about to go for a quick once-round-the-park when my phone beeped. Two new geocaches. One near work, one ten miles down the road from home. I hoiked the dogs into the boot of the car and we chased off after the nearest one. There was a field puzzle to be solved. I found the sign from where we needed to get the information, and after a little false start we were soon where we were supposed to be with film pot in hand. First one to find it. Happy dance. Or I would have “happy danced” if my back wasn’t hurting so much. Pogo’s pulling has strained something.
I then drove the dogs up to Orlestone Woods where we had a little walk. I got to test out the new contoured insoles for my walking boots. They seem to do to the trick, and the boots feel better than they did. We had a rather good stomp round the woods; marred only by a passing nutter who announced that she was going to speak on behalf of Pogo (it would seem that the other two dogs had nothing to say). This nutter then jabbered on about how Pogo likes to tiddle and what he likes to tiddle on. Had she said that she was the voice of Fudge then (just maybe) she might have had some credibility. Pogo doesn’t care where he tiddles, or what’s in the way. When he goes, it is like a fire hose for five minutes.

We came home, and after a little bath the dogs were all soon asleep. I got the ironing board out. With the SkyPlus box playing, I ironed all the way through last week’s episodes of “Victoria” and “Alan Partridge”. And with ironing ironed I scoffed a sandwich whilst watching the first episode of “Trailer Park Boys; The Animated Series”. It was rather good.

I took myself off to bed for the afternoon. Despite Fudge’s barking and Pogo’s licking my head whilst I tried to sleep, I got a few hours’ shut-eye.
I then watched more “Trailer Park Boys; The Animated Series” in which our heroes were getting to grips with being cartoons.

There’s a geo-meet locally. I plan to go on the way to work. So far I’m the only person who’s logged a “will attend” …
Posted by Manky Badger at 6:37 pm