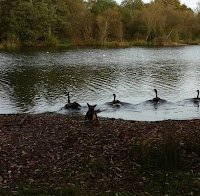 As I drove home after the night shift. I couldn't believe what I heard on the radio. The country's most senior general has publically expressed concern at the thought of Jeremy Corbyn becoming Prime Minister. It is no secret that Mt Corbyn came to office under the suspicion that he was a bit of a twit, and it realls seems that he has done his level best to remove any doubt on the matter. It comes to something when a serving military officer now publically expresses concern about the bloke.
At the time of his becoming leader of the Labour party there was concern about how many people had seemed to have joined the Labour party purely to vote in the leadership ballot. Was the election really fixed? Did tens of thousands of Conservative voters *really* effectively make the Labour party unelectable?

I had vaguely planned to take "Furry Face TM" out to plan the New Year walk today, but I was feeling rather too tired to wrestle with navigating new (to me) footpaths so instead we did one of our standard walks round to Singleton Lake and back. Whilst at the lake my dog was busy snuffling in the undergrowth (as dogs do) so I thought I'd photograth the geese who were looking particularly scenic. It was at that point that Fudge decided to pick a fight with a goose.

Once home I had all sorts of plans about what I might do with the day; but feeling rather tired I thought I'd get an hour's sleep then spend the afternoon doing all sorts of little errands.
I woke up and looked at the clock. I expected it to be early afternoon; the clock said 4.30pm, so I decided to do the petty errands another time.

"er indoors TM" came home and in a novel break with tradition was n't bowling tonight so instead we caught up with watching stuff off of the SkyPlus box.
Can't beat an evening of rubbish telly and grim red wine...
In the meantime the washing machine is making rather seriously bad noises. Perhaps we need the nice man back?