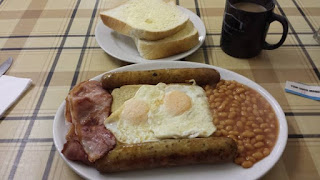 Overnight the radio was full of talk about yesterday's terror attack in France. Details seemed somewhat vague, but.... what can I say? Why?
I also found myself asking "why" when I saw all the postings on social media saying we should pray for the victims? How does that work? Do we pray that something worse doesn't happen? And to what are we supposed to pray? To a God which could have prevented it all in the first place? I'm not sure I want anything to do with a supposed God which clearly *could* make this such a better world but obviously chooses not to.
This is the twenty-first century. We can take the heart of one person and tranplant it into another. We can put people onto the Moon and bring them back safely. And still we act like a bunch of superstitious savages. Sometimes I wonder about what sort of a world we are leaving for our children.

With the night shift done I popped out to get a crafty geocache; today was a blank day on my geo-calendar. I then drove round to the Foundry for a bit of brekkie. Yesterday I only ate toast, and with "er indoors TM" off flogging candles to the masses at a school bazaar (or a bizarre school) today I really felt I should have more than just toast again.
I then took "Furry Face TM" round to the park. I again forgot it was Saturday and therefore jogger day. Skin-tight lycra and bouncy boobies was clearly in vogue today. Result!!
As we were walking home so the rain started. We were rather soggy when we got home. I then spent a little while in bed. But not as long as I would have liked. After a couple of hours my mother phoned with some news. She was rather excited. Her and my dad have made their wills and have paid for their funerals and wanted to tell me where all the documents were. I'm actually rather glad they've done that; it makes a lot of sense to have all these details sorted in advance. But I didn't get back to sleep again after that. Instead I spent much of the afternoon in front of rubbish on the telly with a sleeping dog at my side.

"er indoors TM" came home from selling candles to the masses and brought cake with her. She was just a little sodden. The rain had got worse during the day so we abandoned plans to go to Rye bonfire parade. Instead we had a rather good afternoon and evening in front of the telly sinking beer and wine whilst catching up watching stuff recorded onto the SkyPlus box.
I think I might have an early night....