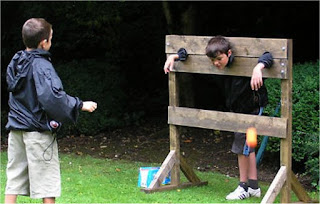 Last night as I worked the radio was playing its usual mix of interest and banal.
There was a discussion about the use of the death penalty in British justice. Arguments were made on both sides; pro and con. I can quite understand that the death penalty is irreversible; in the cases of miscarriages of justice (and there are quite a few) one cannot say sorry after the event.
However would there be many (or any) such miscarriages of justice? Would the death penalty act as a deterrent? I don't know but I am reminded of a chap I once knew who thought nothing of leaving his six-year old daughter eating in a public restaurant whilst he nipped off on errands. When I told him of the dangers of doing so he explained that where he came from (mainland China) his village still had a public stocks in which various criminals could be imprisoned and be pelted with all manner of things. Mind you it didn't happen very often; the threat was enough to make people behave themselves.
Consequently he came from a much safer place. People really did think twice before performing criminal acts.

There was another radio discussion about the rate at which the human population is rocketing. What with increasing birth rates and increasing life spans there are seventy million more people every year on this planet. Various fatuous windbags pontificated on the matter. The general consensus of the fatuous windbags seemed to be that "the lower orders were breeding like rats and decent people (like them) weren't". I couldn't help but wonder if what was seen to be "decent people" weren't the sort of people who would get the chance to breed in the first place.
For myself I realise that there are only so many people who will fit on this world. Having made a conscious decision to stop breeding when I did (and having had my nads cut) I would nevertheless have liked more children.

As well as death penalties and overpopulation the night's radio featured quizzes, plays and an expose on a chap in India who was publically killed by a mob for eating beef. The radio was actually quite interesting for once.
And having listened to all sorts of stuff overnight I'd actually been looking forward to the church service on the radio as I drove home. I was disappointed. Billed as " a celebration of music" it was actually rather awful howling. I turned it off.

Once home I checked social media over brekkie. It would seem that as I slept yesterday afternoon and worked last night so everyone else had had a whale of a time. Those that hadn't been watching bands or karaoke-ing had been out watching fireworks at various events.

"er indoors TM" soon set off with "Furry Face TM" on a geo-maintenance mission. "Geo-maintenance" is one of life's really unneccessary things in the geo-world. People hide geocaches; others go find them. Having found them, these others then do the secret geo-thing and are supposed to put the caches back how and where they found them.
In practice they don't. They don't always close the things up properly. They don't always hide them as they found them. And so a sandwich box which was hidden only a few months ago is soon either waterlogged or missing (or both). But (if nothing else) geo-maintenance is a walk for my dog.

I then took myself off to bed for the day; I would have slept much longer had I not recevied a succession of phone calls and texts in the late afternoon. After the umpttenth I gave up trying to sleep and got up.
The house is lonely when my little dog is not here.

Off to work again...