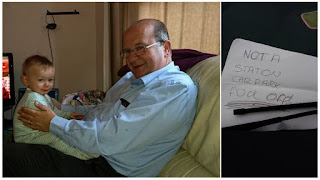 I spent much if the night feeling incredibly cold. In the early hours I finally hit upon the idea of pulling the duvet over myself and suddenly I was warm again. The rest of the night was spent in vivid dreams in which I had hit on the idea to move into sheltered accommodation because it "made sense" (for no apparent reaason). However because the place didn't hold with wild parties I was then taking bus-fulls of geriatrics on major pub crawls.
It was with something of a sense of relief that I got up shortly after 7am; albeit feeling as though I'd never actually been to sleep.

Brekkie was preoblematical; we seemed to have run out of margerine. This was my fault as "er indoors TM" hasn't actually used the stuff since the weekend. So I smeared marmalade onto dry toast and had a look-see on-line. Apart from my cousin having squirted her armpits with hairspray rather than deodorant, not a lot of note had happened in my world overnight (I love social media!).

I took my little dog for a quick walk round the park. He was well behaved; unlike a small child in the playpark. As this child was going to and fro on the swing he shouted "look Mummy - it's my willy". Mother replied "is it darling?" to which said darling responded "Yes Mummy it's my willy". The conversation continued noisily in this vein; we hurried off.
As we came home I saw a hand written notice haad been stuck under the windscreen wiper of a nearby parked car. Commuters regularly park along the local roads because the parking is free. It makes parking for residents somewhat difficult, and clearly one such resident had taken umbrage.

Having a little while spare before work I thought I'd go see my grandson. As I drove the pundits on the radio were wittering on about the literary merits of PG Wodehouse's daughter. Or I think that was who they were wittering on about. I didn't really know, and it didn't really grip me. So instead I put on a favourite album: "Initial Success" by B.A. Robertson. A rather obscure album from 1980; I remember spending my first wage packet from the Harbour Restaurant on a vinyl version.

I got to Folkestone and in a novel break with tradition I was actually able to park near where I wanted to be. I spent a few minutes playing with littlun (and associated dogs) whilst "Daddies Little Angel TM" ranted on about courts and estate agents. She does that.

And so off to work for the late shift. Don't you just hate it when the day is effectively over by 11.30am...