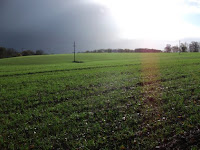 I slept well. Over brekkie I checked out social media. Nothing much had changed in the world overnight. I finally made a decision and spent a few minutes pruning the list of people I follow on that social media. I seem to get endless notifications about the antics of people I once met (for an hour) five years ago and absolutely nothing about people from whom I'd actually like to hear.

I popped the lead onto "Furry Face TM" and we set off on today's mission. Earlier in the week we'd seen a posting on the Sussex geocacher's page from our good friend Gordon asking if anyone fancied a walk round Sandhurst. That is only forty minutes away (traffic allowing) so I thought that might be something to do for the morning before an afternoon asleep.
As I drove the pundits on the radio were interviewing prominent policemen. There are calls for the police force to become a graduate-only profession. There were arguments on both sides... all I can say is that I've seen this happen to my own profession and it has not been an unqualified success.
"Desert Island Discs" came next - Lord Indarjit Singh was the castaway; he was rather interesting.

We soon arrived at Sandhurst church and it wasn't long before everyone arrived. I'd not met several of the people on today's walk. There are those who would think twice about teaming up with total strangers in this way, but I love it. What had (up till now) been random odd names on a geo-log sheet are now new friends.
We had a good walk; there's no denying that the weather was against us today. The remnants of a tropical storm soaked us on three occassions. The mud was slippery; one of our number was on his bum at one point, and I certainly needed a helping hand to be pulled out of a stream and up the bank. But a walk in the countryside with good company is always worthwhile.
I took a few photos whilst we walked too.

Mind you I feel I must be honest. As a geo-walk I cannot recommend the one round Sandhurst. One of the caches was missing; with a C.O. who's not logged in for nearly a year I doubt it will be replaced. The walk was billed as being one of four miles. Admittedly we did start at the church, but that can't have added much to the final distance walked; I measured it on "Hannah" as being a shade over six miles. And we started at the church as the recommended parking wasn't really the sort of place any of us wanted to leave a car.

Once home both "Furry Face TM" and I had a shower. I then took myself off to bed. Sometimes I can get some sleep before the night shift; other times I can't. Today I couldn't. After two hours I gave up laying there and came downstairs and watched an episode of "Upstairs Downstairs". Thomas (the chauffeur) had had his wicked way with Sarah (the nurserymaid). His Lordship was rather shocked.

As I watched the telly so my dog was snuggled up on the sofa next to me. He seemed to be shivering. Perhaps walking in the tropical storm this morning didn't agree with him. If he is still iffy in the morning I shall take him to the vet.
I'm off to the night shift now...