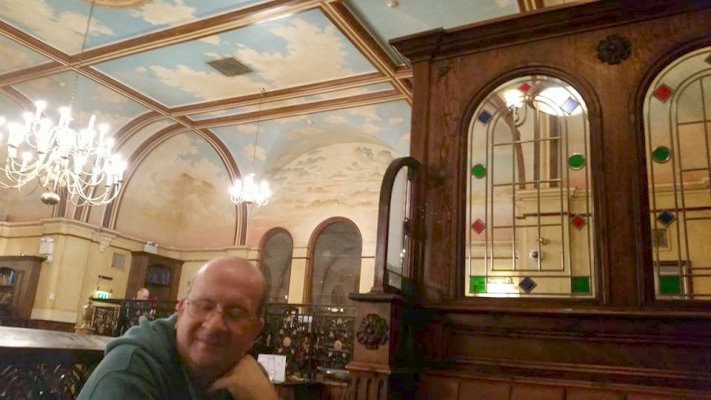 Not including a nocturnal tiddle I slept though until 7.30am this morning when backache finally forced me out of my pit. I came downstairs to find a very sleepy dog still fast asleep. He didn't stir even when I opened the cage door or even when I scoffed toast. He finally staggered over and sat on my lap for morning soppiness which was when I took a few photos of him.

In a fit of boredom I drafted a geo-whinge to post on a geocaching forum. I was wondering what people want from the hobby. Earthcache day was a couple of weeks ago and I only had two logs on my three owned Earthcaches. I put quite a bit of effort into making a new Wherigo a little while back and after five finds in two weeks it's had no one near it in a month. Last month I put a lot of effort into making a puzzle cache. It's been found twice and at the last meet I was told (many times) that said puzzle had gone onto the ignore list as people couldn't be bothered to make the effort to solve it. Yet if I shove a film pot cache under a rock, for all that everyone slags it off,dozens of people actually go look for it.
I did have half a plan to get involved in another rather involved geo-project, but I have a dilemma. I can spend hours of time and effort only to have two people say "well done Mr B", or I can stick a magnetic key holder on the back of a roadside and have swarms of people smiling.
I drafted the geo-whinge and then deleted it without posting it anywhere. It would only start an argument.

"er indoors TM" emerged from her pit and we went round to Asda. She wanted a free flu jab. I'd been offered one but had turned it down. Having been rather dragooned into having one last year I felt rather ill afterwards and didn't fancy that again. I have a theory that when I have the flu jab I am poorly, and when I don't have the flu jab I don't get flu anyway.
Once home I got the Christmas beer out of the tin and into the bucket, I had a quick sax practice much to the disgust of "Furry Face TM", and then we had a rather good bit of brekkie.

Andy and kim came round, and "Furry Face TM" got very over-excited, and when I picked him up he yelped in pain. His back isn't quite right yet. So we settled him down and got the train to Dover. The Rear Admiral and associate joined us half way, and we spent a rather pleasent afternoon wandering round Dover drinking ourselves silly. We found a micro brewery at DeBradlei Wharf we never knew about. We found a new micro pub that plans to start brewing soon. The Port of Call was (finally) open and Kim had chilli cider (yuk), and we finished off the Dover session by a
Dinner in the Samuel Peto in Folkestone went down very nicely, and the rest of the evening was something of a blur...