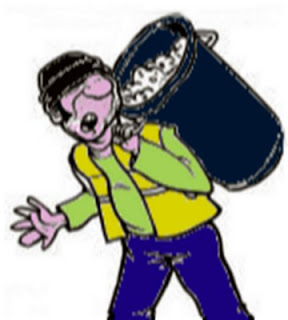 ‘er indoors TM  stuck an extra blanket on the bed last night, and I slept a whole lot better. It’s amazing the difference not being cold can make. And being on a late start probably helped at all. If I know I need to be up for something in the morning I always wake far too early: if there’s no need to be up early I always seem to sleep better.
Mind you there was a minor panic: having convinced myself that it wasn’t recycling blue box day today, it came as a shock as I heard the bin men outside. But I charged out of bed and got the bin to them in time. And went back to kip for a bit.

After a while I hauled my carcass out of my pit and fiddled about going through my post. Whilst doing so there was a bit of a commotion downstairs - “Daddy’s Little Angel TM ” and Sid had arrived to visit. Sid seems to be getting more excitable as he gets older. A bit like his mother, really.

And so to work. Being on a late shift I had planned to pop into the home brew shop on the way to work. But I completely forgot. I’ll do it tomorrow.
Work was work, and over my lunch break I had two phone calls about jobs I’ve recently applied for. Whilst nothing’s come up so far, the agencies both sounded keen, and both suggested that this time of the year is traditionally slow for the kind of jobs I’m applying for. The market apparently picks up in January. Let’s hope so.

Meanwhile I see that neutrinos are still going much faster than science says they should. Did Albert get it wrong? One cannot help but wonder exactly what E is now equal to….