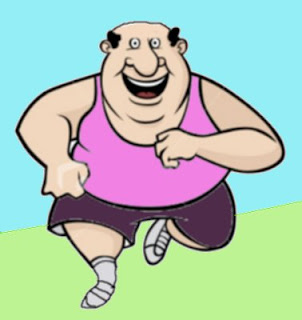 Last night I had a stroke of genius. I get them from time to time. Rather than going to bed at 11pm and waking far too early, I had this plan to go to bed later, and maybe waking a tad nearer getting up time. It sort of worked – I wasn’t awake for as much of the night as sometimes I have been, but it did leave me tired for most of the day.

Something I’ve mentioned in the past, and something which annoys me is how I’ll go from one room to another to do something, only to completely forget what I had in mind when I get there.
I’m not alone in doing this, and science has an explanation. It would seem that the average mind sees walking through a door as being a subliminal instruction to wipe short term memory. That would explain an awful lot.

Last night I mentioned that I walked to Chippy’s house. And (daft as it might sound) I actually felt as though I had less weight to carry about. So tonight I went for a bit of a run. Just up the road and back, alternating running with walking. And I didn’t do too badly for a start. I might try running again tomorrow. I have a long term plan to take the train to work in Canterbury, and to run to and from the train station at both ends. So I need to work on my running a bit.

We then went to Matalan for a nosey – they’ve got all the Xmas bling up: usually I’m an Xmas nut: tonight I found it vaguely depressing.
And then home – over a cracking bit of tea we watched the latest episode of “Terra Nova”. Like most TV, it doesn’t hold up to serious consideration, but I’m finding it to be quite watchable. And for something set in pre-history, they aren’t over-playing the dinosaurs. Which is good.
And then we watched an episode of “the Spoke and Jim Show”, or “Classic Star Trek” as it is known in some circles. I was quite pleased that I successfully identified the four members of the landing party that were going to die, and the one that was going to get goosed. Much as I love “the Spoke and Jim Show”, it can get a bit predictable sometimes…