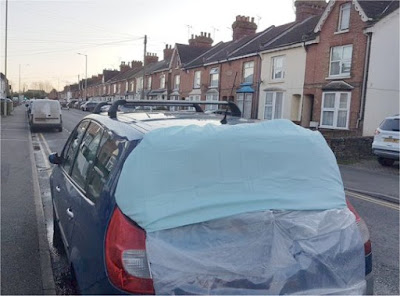 It was very dark when I got up this morning. As I fumbled in the dark I thought I could count two dogs on the bed I wondered where the third was, and found him as I tripped over a sleeping Pogo.
I fussed him, and as I fussed him he was crying. I was standing on his paw. We sorted that, and soon I found myself fussing all three hounds. We had a little "Good Morning" ceremony, then we all had our morning ablutions. Some were less keen than others to go out for a tiddle. It was dark and wet; I wasn't keen on going out, but I did, if only to check that tiddles were done.

As I scoffed a bowl of granola I watched last week's episode of "Inside No 9" which was rather cleverly done, then with all the dogs settled I set off to work just as the dawn was breaking.
As I drove the morning got lighter, and less windy and less rainy, which was a result what with my rear window being on the iffy side. I only had to stop twice to bodge running repairs (which was good). As I drove I listened to the radio which started off with some really pretentious drivel about poetry. This was followed by a wildlife program about where the flies go in the winter. It turns out they carry on flying around like they usually do, but far fewer people go outside to see them in the winter. As some professor of entomology was droning on I couldn't help but wonder if I might have been a fly-ologist. I bet they don't have to drive thirty miles to start a shift at half past seven on a Sunday morning.

I got to work; just as I parked I realised I'd left my lunch at home. Oh well... that will do for tomorrow.
I went in and walked straight past the canteen. Diet means no cooked brekkie.  Mind you for all that hospital food is very good, the brekkie does leave something to be desired. Every time I've had one I get a guts-ache from it. And when you have as much guts as me, that's a lot of ache. Hence the diet.

The shift went well. Apart from a little hiccup with the Duffy blood group system, today's was one of the better weekend shifts I've had recently. I drove home, not needing to bodge the rear window repair at all (which was a result).
Once home I took a dustpan and brush to the car and swept out as much of the broken glass as I could. I might need to have a go with the Hoover in the week. "er indoors TM" then helped me reinforce the bodged window cover by hoiking a shower curtain over the back. It’ll do until I get the repair done properly.

"er indoors TM" boiled up a rather good bit of dinner which we scoffed whilst watching last week’s episode of “Hunted”. I could do that show…
Once we’d scoffed, we then gave the dogs swede and cauliflower for their dinner (with a little gravy); They all loved it. Who would have thought it?