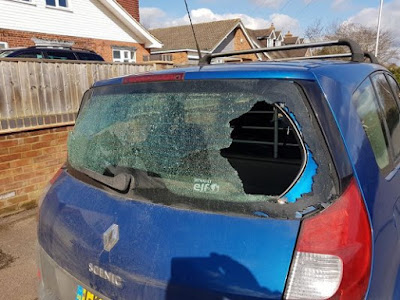 I was sleeping like a log when the bin men came crashing up the road. I wish they would crash quieter. Over brekkie I had a look at the internet and was rather pleased to see that the WhereYougo app is being revived. It is one of a very few ways of playing Wherigo, and without it Wherigo will probably croak. I’ve volunteered to be a beta-tester.
Mind you if you don’t go Wherigo-ing it is probably a matter of the utmost indifference.
With no emails of note I got the dog on their leads and we went for a walk.

I did have a vague plan to go for the First to Find on a geocache in Kings Wood, but didn’t want to get the dogs too grubby so we went round the park. In retrospect we might as well have gone to Kings Wood; after yesterday’s rain everywhere was waterlogged and the dogs were loving running through the puddles and wet grass. The area by the fountain was knee deep in water; I know that as some idiot schoolboy tried to cycle through and fell in. I’d just taken a photo of the flood; getting my camera out again would have been just a bit *too* obvious.
As we walked I was having Pogo and Treacle stop and sit every time we came to cross a road. Several people commented on how well-behaved they were. I’m not sure who was more impressed with those two today, the normal people or me.

We came home; I programmed “Hannah” for tomorrow, settled the dogs, and seeing the weather was far better than yesterday I set off on a little adventure. Firstly I went to get some petrol. Bearing in mind I am on a diet, with superhuman willpower I didn't buy any sweeties. As I drove to Pembury "Women's Hour" was on the radio. Against my better judgement I listened to the show. Some vicious harridan was ranting that white men are responsible for all the racism and sexism in the world purely because they are white men. And people like me trying to say that they aren't racist or sexist are just making matters worse. She seemed to think that the world would be a better place if people like me just admitted to being sexist racists. When challenged about this, this silly woman just ranted that this was the way of things.
One lives and learns.

I stopped off of the way to work for a little Munzee adventure. I scanned bar codes like a thing possessed and came back to my car to get a shock. The back window was smashed.
I don't think it was vandalism; I'd not walked far from the car and no one else had been about. There was broken glass both inside and outside the car, and the window was broken at both ends. I think it just shattered somehow. Old age, perhaps?

Work was work; it took my mind off of the broken window. I did my bit.
Amazingly the bodged repair held all the way home. I’ve reinforced the bodge with a plastic bag to make it waterproof overnight, and I’ve got a plan for making it even better tomorrow…