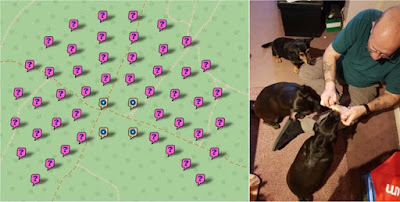 I slept reasonably well; over a bowl of muesli I turned on the TV news. It was rather different to the morning’s radio in that there was a *lot* of repetition. I turned the telly off when they started asking for volunteers to help the NHS… volunteers… that’s a rant for another time.

Facebook was much the same as ever. There weren’t quite so many showing off their ignorance this morning, but there were enough for me to change my Facebook status to “Dear Facebook… in addition to the “like”, “love”, “haha”, “wow”, “sad” and “angry” reaction response icons, could you please create a “FFS” one with which I could respond to much of the fuckwittery I am seeing posted on a regular basis right now…”
However this morning did see an upsurge in posting from the hypochondriac brigade who were noisily staying at home. Don’t get me wrong – I have several friends who aren’t well and who do have chronic illnesses who really should be at home during the current coronageddon. However I also have several people on my Facebook list who go to the doctor if they so much as fart twice in half an hour. It was the latter who were making the most of it this morning.

Amazingly the co-ordinate projection software was working this morning (it’s a geo-thing). I got rather cross with it yesterday evening when it could project anything I wanted provided it was in a due north direction, which is no use when you are trying to make a circle. I’m looking to make a pretty pattern with geo-icons for a new series of geocaches that I am planning. There are those who don’t like that sort of thing, but on the whole, those who don’t like it are those who contribute absolutely nothing to rummaging under rocks for film pots.
I managed to eventually produce my geo-art. I’m quite pleased with it. It’s just a geometric shape, but "er indoors TM" says it looks like a peacock.

Despite the current lock-down, the Prime Minister has said that everyone is allowed out for one bit of exercise a day. I could have walked the dogs round the park, but we would encounter people there. I drove up to Kings Wood where we walked for four miles and only saw three other people. One of them had headphones on and was utterly oblivious that I had said hello to him. (I thought that was rather rude). One was a chap on a mountain bike. We kept at least ten yards apart; the chap told me he was self-employed and was rather concerned for the future. He asked what I did; I told him. He thought I was some sort of super-hero. The third one we encountered came past as he was driving a four-wheel-drive down one of the rough tracks some two miles from the nearest road. I wonder what he was up to?
We had a very good walk; the mud had dried out, we saw a huge bird of some sort. Heron or buzzard? It was about the size of an ostrich.
It was only a shame that the dogs had to eat quite so much horse manure.
As we walked my phone beeped. Someone somewhere had scanned a bar code I’d stuck to a lamp post and the resultant points I’d got had made me a level 101 munzer. Result!

With walk walked we came home. The Prime Minister has also said that everyone is allowed out for essential shopping, and Pets at Home was closed yesterday when I went there so I popped round for dog food.
Oh dear…
Fuckwittery was in full force there.
They had a little old lady on the door controlling how many people were in the store at any one time. A good idea in theory. In practice did she have to take quite so long to decide to let me in when there were only two other customers in there?
I got the dog food and took it to the till. I put it on the counter, and the chap at the till asked me to step back to the yellow square marked on the floor some six feet away. So I did. When he asked for payment I explained that I couldn’t reach the card reader device from six feet away. He said that I could come forward; I only needed to keep my distance when he was scanning the stuff I’d bought. Sensible… so I came forward expecting him to move back. He didn’t. Instead he leaned forward and (with a smile) started banging on about how more people should be co-operative like I’d been and abide by their rules. I smiled sweetly and resisted the urge to ask if viruses only attack the checkout lad when he is otherwise distracted by scanning merchandise?

I spent a little while (three hours) doing geo-admin for the new cache series I have planned, then looked at the household accounts. Today I looked at the annual summaries… I try to put aside money that we might need in case of disaster and (despite one or two disasters), we’ve ended the year with slightly more in reserve than when we started, for which was pleased. I also saw that the council tax for next year has gone up by a fiver a month, but the water bill’s now cheaper. As always I seem to be doing OK financially… not ridiculously wealthy and rolling in money, but OK…
I can remember when I first started testing blood for a living in 1981. Up till then I’d been working in my spare time in a seaside restaurant. I’d often spoken with the boss about taking the plunge and buying a restaurant of my own. It would mean tremendous bank loans and a lot of risk, and I decided against it. I plumped for a regular wage. At the time my boss (“Boss” was a little fat Italian chap who was in retrospect one of the wisest men I ever met) told me that by doing this, I would be comfortable financially in life, but I could be so much more.
Yet again I find myself looking back to this chap and wishing I’d listened to him.

"er indoors TM" cleared some space in the freezer (as we’d had a meat delivery) and she found a bone that we’d frozen for the dogs ages ago. I say “dogs”; it was probably from a time before Treacle. With the bone defrosted I sat down and supervised the dogs who enjoyed it immensely. There was no quarrelling or squabbling. Each dog had a chomp and waited patiently (mostly) for their next turn. My dogs might not be the best behaved dogs in the world, but there’s not many that will share a bone.
"er indoors TM" then took the dogs out (for her daily exercise). In all the excitement Fudge sicked up the meat he’d chewed from the bone, and before anyone could do anything, Treacle and Pogo ate it.
Dogs can be foul creatures…