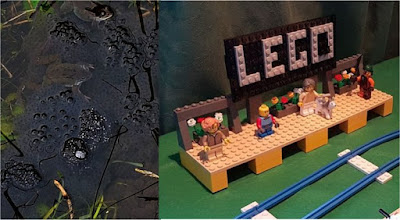 The night shift went as well as any night shift could do. As I drove home I laughed out loud. The pundits on the radio were interviewing the president of “British Naturism”; the organisation for the nation’s naturists.  They’ve got the hump because everyone else points and laughs at them and suspects them of all manner of perverted and unnatural behaviours simply because they run round without any clothes on. I felt a little sorry for the bloke until he announced that naturists should be an “official minority” with all the rights and protections offered to any other minority. He seemed to feel that running round in the nip should be regarded as some sort of philosophical or moral stance, and was therefore almost a religion. Consequently (so this twit maintained) ripping the piss out of those in their birthday suits was a “hate crime”.
This was followed by the weather forecast which predicted a warmer day. The interviewer commented (rather sarcastically) that the naturists should be grateful for that…

I got home and took the dogs round the park. It was rather muddy, and we saw that the frogs were laying loads of frogspawn in Bowens Field. Spring is on the way.
The walk went rather well until we were nearly attacked by some out-of-control wolf-like canine which flew out of a house and ran down Jemmett Road at us. It went for Pogo but stopped dead in its tracks when I yanked Pogo behind me and shouted a swear-word (very loudly) at it. The dog then stood there looking rather sheepish until a little weasel of a man came running after it. He didn’t seem pleased that I’d been disrespectful to his dog, but couldn’t really say anything as he couldn’t deny that he was clearly in charge of a dangerous animal.
We walked away; I felt rather smug that (for once) it wasn’t my dogs causing the problems.

We came home; I went to bed and got up four hours later. I made myself some toast, watched an episode of “Uncle” then wasted half an hour. The leccie company had sent me a letter saying that the tariff I was on was coming to an end. I wondered if I might get a better deal elsewhere, so I phoned U-switch. After half an hour I finally told the woman at the other end of the phone line that I couldn’t understand a word she was saying. I *think* she as saying that I was already with the cheapest provider, so I used the on-line thingy of the company I was with already to get a better deal. I had it sorted in minutes.
And whilst I was at it I renewed my fishing licence. That’s thirty quid for something I will use maybe half a dozen times this year.

Still feeling rather tired I went upstairs to the attic room and played Lego. I built a couple of platforms to make a start on a little Lego station for the train. That wasted a couple of hours. As I built and took apart and re-built so the dogs barked on and off for no reason whatsoever. It’s a dog thing.

"er indoors TM" boiled up some dinner. I counted its calories, then she went bowling. I watched a film on Netflix. “England is Mine” was based on the early years of the singer Morrissey and it was rather crap.
I think I might have an early night…