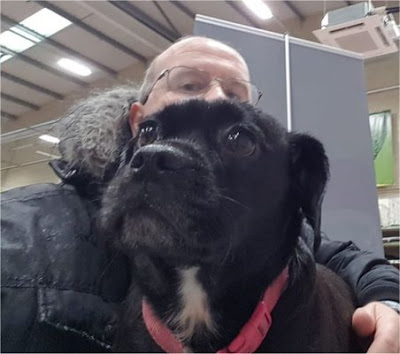 Yesterday evening we had the margarine on the table with dinner. This morning as I tried to make a sandwich I could only find the lid of the margarine. The actual tub came to light eventually. Hidden behind a chair and licked clean. Treacle is the prime suspect; Fudge wouldn’t do something like that and Pogo would just be brazen about it. Treacle knows it is wrong and so tried to hide the evidence.
Did I ever mention I never wanted dogs?

Today is “World Book Day”. I say “World Book Day”; my Facebook feed was filled with photos of children in fancy dress. Rather than being a celebration of literature, “World Book Day” is just an excuse for dressing up at school The spirit of the thing was summed up entirely today by one little incident. A colleague was grumbling that she’d been up till after midnight making a frog costume for her son to wear to school for “World Book Day”. When asked if he was “Toad of Toad Hall”, she said that he was just a frog. Apparently most of the girls in the class had gone as various Disney princesses since you can get colouring-in books of most of the Disney films. I suggested that the lad should have gone in his usual school uniform; he could claim he was dressed as “The Boy Whose Mother Couldn’t Be Arsed”.
I’ve ranted about this before.
Last year on “World Book Day” I started a little project in which I recorded all the books I’ve read since last March. You can see that by clicking here. I’ve kept the thing going for a year… shall I keep it going?

I got the dogs into the car and we drove out to the garage where "er indoors TM" had left her car to get it serviced. We collected her, took her to her work, then went to the park for a walk. It was raining, but we still like our walk.
As we walked we had an “episode”. I maintain we were just innocent bystanders… Fudge was straggling. As I looked back for him so I saw some woman was cycling along with her dog. The dog was on a lead tied to the bike. As the woman cycled past Fudge so her dog ran round the front of the bike to see Fudge. This was a big dog (about the size of a rhino) and with a lead attached; when the dog stopped it was as though the bike had dropped anchor. The bike (and cyclist) skidded in the rain and hit the tarmac path like a rubber duck. As I helped her up she had things to say about dogs that weren’t on leads. I did explain what had happened; a dog lead was entirely the cause of her falling off.
Silly cow!

We came home and dried off. I hung one load of washing on the clothes horse and put another load in to scrub then took Treacle to the vet. She’s been doing the “bum wiggle dance” recently (it’s a dog thing) and the only cure is for the veterinary nurse to shove a finger up the bum to empty her anal glands (Treacle’s, not the veterinary nurse’s).
Yuk!
As we waited there was a minor fracas kicking off. Some six-stone weakling was trying to restrain his dog. His dog looked to be a cross between a grizzly bear and a t-rex and was named “Zeus”. Have you ever noticed that small men always have humungous dogs and name them “Zeus” or “Tyson” or “Death Bastard”? You never see a little man with a pug named “Petal” sporting a pink ribbon, do you?
Treacle got the finger up the bum. I can’t say she was impressed with it. She also got put on the scales and would seem to have lost no weight at all. I didn’t tell the vet about the tub of margarine…
I hung out the second load of washing and set off to work.

In the past I would have had a little geo-adventure on the way to work. More recently I might have gone Munz-ing. But with the forecast "light rain shower" becoming more and more torrential I drove straight to work. As I drove I caught the end of some drivel on the radio about journalism in Russia, but when this was replaced with a wannabe pretentious saxophonist learning the fine art of pretentious-ness from a guitarist I turned the radio off and sang along to my fine choice in music.

I eventually found a space in the car park and went in to work. Beef lasagne was on the menu in the works canteen; that was rather good. But being (supposedly) on a diet I skipped pudding. That was rather abstemious of me, wasn't it?

I did my bit on the late shift. As is so often the case on late shifts, the best bit of the day had been before noon. Mind you the journey home was interesting. I nearly ran over a deer, the road at Sissinghurst was flooded, and the road at Bethersden was closed…