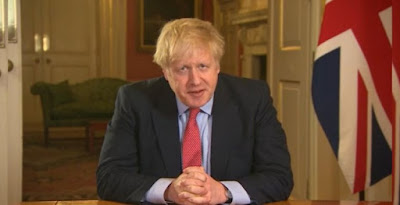 There’s no denying that I felt rather grim when I woke. Red wine, port and amaretto does that.
This morning I had a hot cross bun for brekkie; there was no bread in the corner shop yesterday but they had hot cross buns and so I panic-bought four of them. Not a bad brekkie really I suppose. As I scoffed it I had a look at the Internet. Coronageddon panic was everywhere with maybe one person in a hundred seeming to appreciate the difference between “social distancing” and “self-isolating”. I resisted the temptation to point out the fallacy of some people’s attempts at logic, but you can’t argue with stupidity, can you?
I then put the telly on and watched the news. The Minister for Health was being interviewed. The chap has got a very difficult job at the moment; it is easy to knock politicians but at these difficult times they really do need our support. Having said that he didn’t come over at all well. He wasted ten minutes of air-time spouting meaningless phrases rather than saying anything of note.

I drove "er indoors TM" to the garage where we salvaged as much gear as she needed from her car before going to talk to the nice garage man. Or that is she went and talked to him; I stayed in my car. The nice man in the garage said it will be two weeks before they can even look at the remains of her car. I must admit I thought this might be the case; whenever I’ve been there they’ve always had a full diary. Oh well, probably as well that she’s working from home.
I did suggest that she come for a walk with me and the dogs, but she felt she should get on with work. So I dropped her home and took the wolf-pack down to Orlestone woods where we had a good walk. We met one other person; a little old lady with a Jack Russel and a large poodle who we’ve met her before. There is a nodding acquaintance in the dog-walking fraternity; just both having dogs is reason enough to strike up a conversation. The little old lady summed up her attitude to coronageddon and she seemed to be in complete agreement with me. She’s in the “at risk” group (in several actually) but her dogs need walking. Bearing in mind I was the only person she met in the woods and she could see we were both keeping a sensible distance, she was as isolated in the woods as she was at home. And having come out she could at least talk to someone rather than being totally alone all day long.

We came home, and I then popped to Tesco. I had orders to get cherry tomatoes; they didn’t have any. In fact they had hardly any vegetables at all. Loads of fruit, but very few vegetables. Go figure! They had bread so I got some. They only had two bottles of diet Doctor Pepper, so I panic-bought those, as well as a few bottles of beer (just in case).

Once home we had a cuppa. I didn’t really have much of a plan for today; I just had a day’s leave which I could use or lose, so a month ago I decided “use”. I spent four hours writing a very simple Wherigo, and another couple of hours re-writing three others. Then two more hours creating geo-art. I say “art”; “geometry” is closer to what I did.

We had a rather good dinner, and for afters we had fresh raspberries and cream. With no toilet roll or dog food in the supermarkets, there was plenty of cream and raspberries.

And then we watched the Prime Minister’s broadcast to the nation. I expect this will be something about which the future historians will wax lyrical, and I will be able to say “I was there”.
He’s put the nation in lockdown. I can now only leave the house to get essential food shopping, one bout of exercise a day, and to go to work.
It’s all getting rather serious…