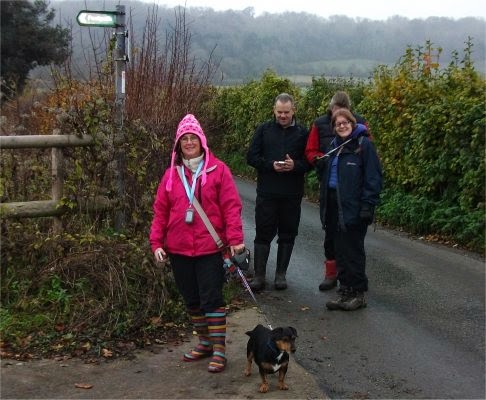 I slept like a log last night, but woke with a *serious* sulk on. I have no idea why I should have had a cob. I wonder what that was all about? I came downstairs to find "Furry Face TM" was asleep in his new basket; at least he seemed happy.
Over brekkie I checked out Facebook. Several people were claiming that the craze for "Black Friday" sales was somehow inspired by the sales of slaves immediately after Thanksgiving. Obviously it was not, but trivia such as factual accuracy has never stopped anyone posting rubbish on social media.

We got ourselves together, we put the lead onto "Furry Face TM" and set off on today's adventure. We collected Kim and Andy, and met Aleta at Trottiscliffe Country Park. There are those who claim the place is prononced "Trosley". If that is the case, why is is spelt" Trottiscliffe"?
Five of us (and one convalescent dog) set off through a misty morning round the Hognore Hike. Billed as a walk of five miles we were rather surprised to find it was one of five miles; so many time we find the published mileage of these geo-walks to be seriously under-estimated. A five mile walk was what we wanted for today; with "Furry Face TM" doing his first all-day walk for a couple of months we wanted to re-introduce him gently.
The walk was excellent. The route was well laid out with only one serious hill climb. The geocaches were mostly easy finds (*if* you knew what you were looking for) and the scenery was lovely. The views would have been better had the day been less misty, but you can't have everything.
We did have "episodes" with a couple of the caches. One looked to be far too close to an adjacent cache; it was only on reading the instructions that we figured out what we had to do. "Walk up the road for about a hundred yards, turn right, and after about twenty paces look for a fallen tree". It was at this point that I truly realised the difference between locating something with pin-point accuracy using satellite-based GPS tecnhology and randomly guessing which fallen tree in the woods is the one that we have been sent to find as opposed to all the others that are not.
And our other problem cache involved a field puzzle. We were taken to a duck pond by a manor house where we were instructed to count up chimney stacks, satellite dishes, windows, do some sums and come up with some co-ordinates.
I maintain that the person setting the puzzle hadn't seen as many chimney stacks as I did.
But these were minor hiccups; nothing that couldn't be overcome with a decent helping of idiot enthusiasm.
I even took a few photos of our journey.

We'd started walking shortly after 10.30am; we got back to the car about five hours later. I had fully expected to have ended the walk carrying my dog as I thought it might have been a bit much for him. But he walked (and ran) all of the way. Once home he had a bath; I'd forgotten just how much dirt and mud a small dog accumulates in the woods. He then curled up in his new basket and went to sleep. As he snored we wrapped him in a towel.
In many ways having a dog is like having a toddler again.

We then spent half an hour iindividually wrapping cans of lager for an advent calendar for "My Boy TM" , and talking of advent calendars, it's nearly that time again.
And with "er indoors TM" off bowling I settled myself in front of the telly. It's a tough life.