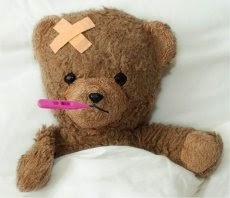 I was licked awake by “Furry Face TM “ this morning. I’d slept through till after 8am. I got up, had a shave, and over brekkie saw that three new geocaches had gone live in the Canterbury area. Oh well… they will keep till I’m back at work.

I popped the lead onto my little dog and took him for a walk. He was raring to go; we walked through Bowens Field Wetland Park (which was *really* wet) up to the town centre. From there I field-tested the programing on my latest Wheri-project. We walked about three quarters of the walk I had planned when I realised that “Furry Face TM “ was struggling to keep up. He didn’t complain, but he was seriously straggling. For all that he runs around like a thing possessed, he’s obviously not completely recovered from his ordeal. Bit like me really.
So we abandoned the walk and came home. My little dog took himself off to bed and snored for much of the rest of the day.

I wasn’t feeling quite one hundred per cent either; I think I might have caught a cold. So I slobbed in front of the PC whilst watching on-line lectures on my latest Coursera course. It’s about the origins of life, the universe and everything from the perspective of a Danish geologist. It’s interesting enough so far.

I did a couple of the lectures, and then settled myself down in front of the PC and solved a few geo-puzzles. There’s a series of caches near Maidstone that will make for a good walk in a week or so; but one third of the series are puzzles. So I spent a little time doing trigonometry and literature and crosswords and generally puzzling.
As I puzzled we had a visitor. The most recent fruit of my loin called with the most recent fruit of her loin. I cuddled with littlun and dozed with littlun until it was time for them to go.

I then went back to geo-puzzling; I solved eight out of the ten I tried. That’ll do for now. More Coursera, a little kip, and then had an evening spent ironing and feeling vaguely unwell.

I realise I’m not supposed to be having excitement whilst on sick leave… but it is on the dull side.