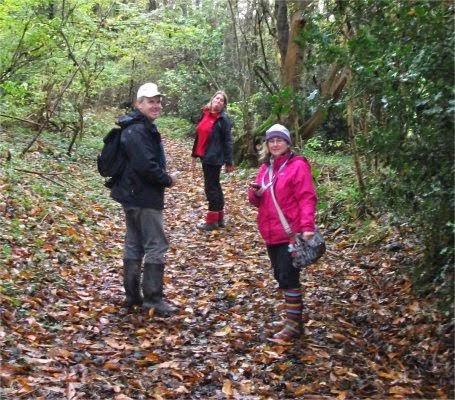 I slept like a log.. until 3am. After a nocturnal tiddle I then lay awake waiting for the time to pass. I got up, shaved, and sloshed out the sinuses. Perhaps I'm getting used to doing this; I only felt dizzy and nauseous for a few minutes afterwards this time.

We got into the car, picked up Kim and Andy, and set off to North Kent; Hodsoll Street near Meopham where we had planned today's geo-stroll. Bearing in mind the rains of the last few days we were expecting the going to be somewhat boggy underfoot. And it was.

We started off by delaying for a few minutes whilst we watched the parrots flying around. Yes - parrots. In my back garden we have starlings and sparrows. Over at the co-op field there are seagulls. And at Hodsoll Street there are parrots flying around wild.
We moved on, we met cows as we went. We found some rather fun caches; including a multi-cache the like of which I'd not seen before. It was a shame we managed to make a bog of solving that puzzle, but use of geo-expertise led to a find in that case. Use of geo-expertise also ended up with me on my arse in the mud. Geo-expertise is best used sparingly.
And we even had a two minutes silence at 11am too.

Billed as a walk of four miles it was rather unusual to find that it was actually four miles; the publicity surrounding geo-walks usually considerably under-estimates their length. Four miles was about right for today. Or, to be more specific, four miles was about right for me today. Bearing in mind that in the past I've thought nothing of walks lasting all day long covering over twelve miles, today I struggled to get round. When we got back to the car I was really feeling all in.

We stopped off at the nearby pub for a crafty pint, then after failing to find a puzzle cache on the way home I then slept for most of the rest of the journey home. I took a few photos whilst we were out; ond once home we had a cream tea whilst watching the season finale of Doctor Who. Last week I sang the praises of Doctor Who; following on from last week's rather good show, today's episode was something of a disappointment.

With "er indoors TM" off bowling I set about organising myself for next Saturday's geo-meet. I have solved one of the puzzles I needed to solve. The other one has me foxed; I have abslutely no idea how to proceed with it. If any of my loyal readers have any ideas.... please try them out and send me the solution (!)

And then (after a little kip) I watched the last episode of Downton Abbey. It's a shame its finished; I do like that show.