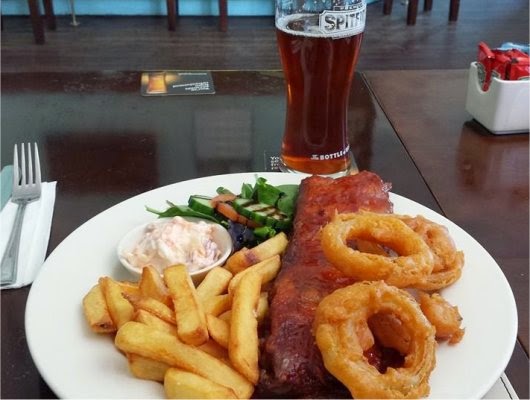 This morning's emails brought one from the island of St Helena. Yesterday I was quite fired up about the idea of going to the south seas for a year. I had this naive idea of swapping my white laboratory coat for a Hawaiian shirt. This morning I found that what was actually being offered was not that which had been advertised.
They don't want someone to do the work I do now; they want a manager. And it wasn't for a year's contract; it was to be an ongoing open-ended arrangement which could be ended whenever they felt like it.
I've been a manager before. I was one for ten years and didn't like it very much. And I'm not keen on an open-ended arrangement either. I have bills to pay and need some measure of security.
Oh well; it was a nice dream while it lasted.

I put the lead onto "Furry Face TM" and we went for a walk. Bearing in mind that the park is filled with (bloody!) joggers on Saturday mornings we went round to Frog's Island. Leaving aside an impromptu game of "rabbit skittles" in the pet shop the walk was uneventful.

We set off to the Medway towns; the idea was to go to the Tiger Moth for lunch. Admittedly we were there a little early. Had they said "Sorry; we're not open yet" then maybe I might have waited. However they didn't. They didn't actually say "f@!k off we're shut" but that was certainly their implication. So we went down the road to the George. The food there was good, but the beer had gone off and the locals were rather scary. I actually left half a pint.
Gordon Tracy arrived, and we spent the afternoon going here and there round the Medway towns doing odd geocaches. Some were rather good; incredibly tricky. We managed two with the maximum difficulty setting. On the negative side we found one which seemed to have been drop-kicked into a thicket, and I found (yet) another playground-themed cache.
I had no idea there were so many hills in the Medway area; for no reason I seemed to wilt rather quickly today. I slept for most of the journey home.

With "er indoors TM" off to Folkestone for film night I had film night of my own. During the week I'd recorded a biographical film about Margaret Thatcher's early days. I suspect it was based far more on what would make a good film than on historical fact, but it made for entertaining viewing.
I also made a start on the laundry basket. I had that thing emptied only the other day. How come it's overflowing again?